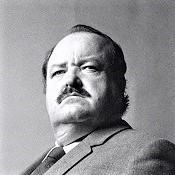 [Editor’s note: This week we are happy to welcome back Golden Age of Radio buff and Asimov’s author Pete Wood as host for this episode of Escape. While the initial generic introduction and background material has been used in previous episodes for those coming to Escape for the first time, the specific notes for this episode–one Pete has selected as one of his favorites–are his. We hope you enjoy this adrenalin-filled episode of Escape.]

Escape (1947-1954) aired “Violent Night” on March 18, 1954. A spinoff and sister show of the highly popular radio program Suspense (1942-62), Escape produced (according to one source) 251 episodes of which 241 were unique stories, plots, or scripts, Escape concentrated on adventure tales, often in exotic locations. Escape soon established itself with an even more focused approach to action and exotic adventure, dramatizing literary classics (from such as Rudyard Kipling, Sir Arthur Conan Doyle, Edgar Allan Poe, Ambrose Bierce, Nelson Bond, Ray Bradbury, Eric Ambler, Jack London and others) while at the same time treating its audience to many brand new tales, a fair number of which have become radio classics.

While strangely not consistently supported by its host network CBS, which rarely gave advance notice of upcoming program titles and moved the show to different times and days willy-nilly no fewer than 18 times over its 7-year run, the show found a faithful audience, and continued to produce well-written scripts with many of the finest actors in radio.

“Violent Night” begins with quite a hook. “You are kneeling in the church of a Caribbean village seeking the sanctuary it might offer whilst slowly walking down the aisle carefully studying each bowed head is the brute of a man who has come to kill you.” Wow.

William Conrad plays Barry O’Grady, the American owner of a vast coffee plantation on an unnamed Caribbean Island. He awakens in the middle of the night to discover that the country is in the throes of revolution and the chief revolutionary, Alacran, has a personal grudge against him. After Alacran shows up at O’Grady’s house with armed soldiers to settle the score, O’Grady runs for his life.

Alacran had worked for O’Grady two years before. The plantation owner stripped Alacran of his weapons and “beat him to a bloody pulp” for preaching revolution to the workers. Alacran, educated in the United States, fled into the hills and never forgot O’Grady.

“Violent Night” is a gripping, suspenseful tale, but its premise has not aged well. O’Grady isn’t exactly a deep thinker and seems oblivious to the revolution around him, except for Alacran’s revenge. Revolutions don’t arise in a vacuum. O’Grady never ponders the reasons for the social upheaval and is only concerned with how it impacts him.

The people of this unnamed country must have some concerns. We know that O’Grady owns miles and miles of coffee lands. We know that working conditions on his property are enough of an issue that Alacran has an audience with O’Grady’s employees. O’Grady isn’t terribly concerned with human rights since he beats disobedient employees to a “bloody pulp.” And, although Alacran is presented as a bit of an animal, the other revolutionaries seem to be reasonable men.

I suspect none of these were a concern of most listeners in 1954. And, any similarities to a real life Caribbean Island where a U.S. educated revolutionary fled into the hills is purely coincidental.

“Violent Night” has strong ties to the radio version of Gunsmoke. William Conrad, of course, played Marshall Dillon. Norman MacDonnell, the director of “Violent Night,” created Gunsmoke and directed a number of episodes.

The most interesting tie-in is the scriptwriter, Les Crutchfield. The author was a bit of a tough guy himself. A former explosives expert and mining foreman, he turned to the safe career of scriptwriting. Most notably he wrote eighty episodes of the radio version of Gunsmoke and penned quite a few episodes of the television program. He died young in 1966 at the age of fifty.

Joyce McCluskey, Conrad’s co-star, plays Alacran’s daughter, a spunky foil (at least by 1950s standards) to his plantation owner. Born in 1928, she had a decent radio career that spanned 1945 to 1958. She appeared in a number of episodes of Escape as well as Dragnet. She had a brief television career, most notably a number of roles on Dragnet. She quit acting in 1958.

Don’t get me wrong. “Violent Night” is quite the tale and worth a listen. It’s just interesting how it looks through the lens of 2019.

{March of 1954 found our neighborhood rapscallions enjoying the first hints of true Spring, their heads definitely not on their homework and most decidedly on their next trip to the corner newsstand. Astounding SF (1930-present, now Analog SF), with the tease of a new Cliff Simak story on the cover was much too hard to resist. “Immigration” turned out to be a novella concerning an alien species accepting only certain high IQ humans for emigration to what was being sold as an idyllic planet. But when they read between the lines, as it were, was it really? Analog was a monthly in 1954. The Magazine of Fantasy and Science Fiction (1949-present) was hitting its stride and now a major player on the SF magazine scene, witness the star attractions on this issue’s cover, not least of which was the promise of a new Alfred Bester novelette. It turned out to be the oddly titled “5.271.009,” a story that could have only been written by the likes of Alfred Bester. F&SF was a monthly in 1954. Planet Stories (1939-55) was one the most beloved staples of the golden age of the SF pulps, but was now nearing the end of its fabled run, for it would fold its tent after only 7 more issues, the Summer 1955 issue heralding its final hurrah. With a great cover like the one below it is no wonder that it was picked up by several of the neighborhood gang’s wannabe astronauts, for if this cover was a showcase promoting the allure of space then who wouldn’t want to do a little galactic exploring? Planet Stories was a bi-monthly in 1954.} 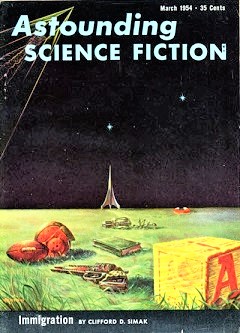 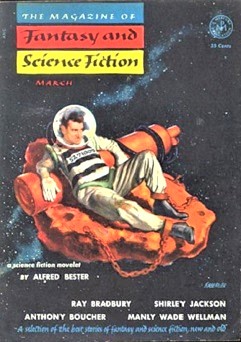 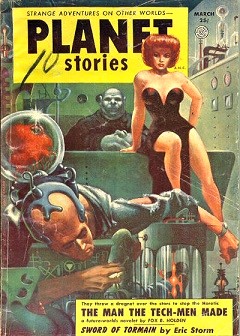