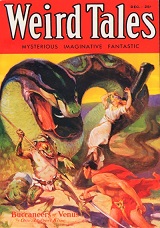 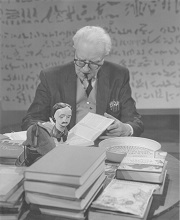 Escape (1947-54) aired “The Fugitive” on August 15, 1948. It first appeared in the December 1923 issue of Tip Top Stories, the relatively short-lived magazine’s first issue. Written by supernatural horror and mystery writer Vincent Starrett (1886-1974), this story was reprinted in his first collection Coffins for Two (Covici-McGee Company, 1924, cover lower left). Starrett began his career as a crime reporter, then in the 1920s and 30s began writng for the pulps (both fantasy/horror and mystery).

One of his main outlets was Weird Tales, the cover at left including one of his stories, “The Quick and the Dead” from the December 1932 issue. In 1965, Arkham House would collect ten of his stories under the same title, including “The Fugitive” (cover lower right). An admitted bibliophile and diehard Arthur Machen devotee, Starrett is credited with bringing the Welsh author and mystic to the attention of an American audience for the first time. Starrett was also a lifelong fan turned aficionado of Sherlock Holmes, penning in 1933 his most famous Holmes work, The Private Life of Sherlock Holmes. He also was a founder of the Chicago chapter of the Baker Street Irregulars. 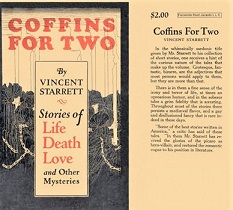 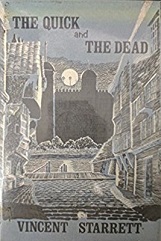 Starrett was well regarded as a poet, but his popular notoriety came from a series of detective novels featuring one Jimmy Lavender. They were set in Chicago, where the transplanted Toronto native spent most of his life.

Vincent Starrett’s name was familiar to me only from seeing it on an old pulp cover here and there. His is not a name most SF fans would recognize these days, for his output in the SF/F genre was not great and his stories appeared a long time ago. While doing research on him for this introduction I searched the usual online haunts where such background information can usually be found, but came up relatively empty in certain areas. For instance, I could not find where “The Fugitive” originally saw print, only its inclusion in the 1924 collection Coffins for Two. I did find, however, a website devoted to the works of Starrett titled Studies in Starrett, a fine site run by Starrett fan Raymond Betzner. Hoping he might know the original publication venue and date of “The Fugitive,” I emailed him with my query. Sure enough, Mr. Betzner provided the story’s first appearance, that of Tip Top Stories for December 1923, for which I now gratefully acknowledge and thank him for his assistance.

Having learned the issue and date where “The Fugitive” was first published, my next challenge was finding the cover for inclusion here, a practice I follow whenever possible. Again though, after exhausting my usual sources for locating magazine covers and searching the internet high and low with no results, I turned to the premier pulp magazine expert in the field, Mike Ashley, for surely if anyone could locate the cover of Tip Top Stories #1, for December 1923 it would be Mike. As helpful as always (Mike has contributed his expertise before when I would become stuck with a date, or to confirm some bit of esoterica related to the pulps and Old Time Radio), I soon received the following reply (with permission to quote):

“You could look for that cover for a hundred years and never find it!  Well, not quite true. TIP TOP STORIES is one of the rarest of all magazines. The only place where I know they exist are in the British Library, and even though they do have a full run, some guy years ago decided to laminate the covers to “protect” them with the result that they have a white gauze over them which reflects any light when you attempt to scan or photo them. The cover I reproduce in THE AGE OF THE STORYTELLERS, which is the July 1924 issue (when it had changed its name to THE REGENT MAGAZINE) looks so faint, and that’s because of this laminate.

So, I wouldn’t spend your time trying. I would love to find copies of this magazine but in over 30 years of looking, I’ve never found one for sale.

This came as quite a surprise and is of course why there is no cover shot of the magazine wherein “The Fugitive” was first published, for as it turns out it appeared in one of “the rarest of all magazines.” As to its publishing history and the name change to The Regent Magazine, Mike adds that “TIP TOP STORIES was its formal registered title but the cover also ran it with a sub-head OF ADVENTURE AND MYSTERY. It saw sixteen issues from December 1923 to March/April 1925, but changed its name after the first 6 issues and became THE REGENT MAGAZINE from June 1924 and continued monthly to March 1925, that last issue being dated March/April. Evidently plans to change it to a bi-monthly schedule ended there because Hutchinson’s, who had taken over the magazine with the Feb 1925 issue then merged it with THE SOVEREIGN MAGAZINE.” As the late, great Paul Harvey was famous for concluding each of his radio broadcasts, “And now you know the rest of the story.” I wish once again to thank Mike Ashley for solving a mystery–one that happens to involve both Old Time Radio and the early Pulp Magazines. Thank you, Mike.

I never know, from week to week, which OTR episode I will choose. Nor do I have any idea what I might find while doing research. While aware that this episode would be the 400th individual post, I had no clue it would turn out to be such an interesting one and the story would lead where it has. I hope you have as much fun reading about and listening to these weekly forays into Old Time Radio as I do putting them together. They’ve evolved into quite a bit more than what I envisioned them to be when I began them back in the summer of 2009.

Without further preamble:  “The Fugitive,” set in southern France, is the story of a brilliant jewel thief who escapes from prison and is hounded by the equally brilliant policeman who put him behind bars. Theirs is a game of cat and mouse, much like that of Sherlock Holmes and Dr. Moriarty, two geniuses in their own right. While not strictly a genre story, it does have at least one genre-bending element to it involving a strangely forged knife and its effects on the person who possesses it. This adaptation is extremely well written and acted, with a dramatic denouement that adds a moral dimension to the usual thief/cop battle of wits, turning “The Fugitive” into a taut 30-minute thriller.

[Left: Bookman’s Holiday: The Private Satisfactions of an Incurable Collector, 1942 – Center: The Private Life of Sherlock Holmes, 1933 – Right: The Case-Book of Jimmy Lavender, 1944] 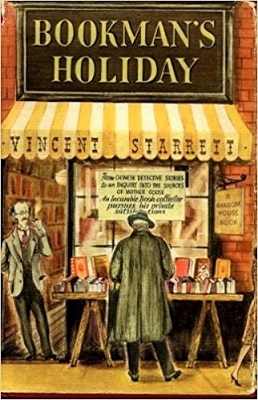 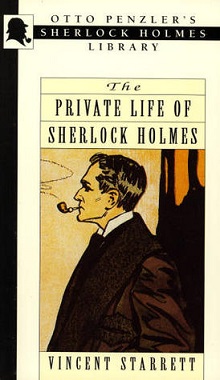 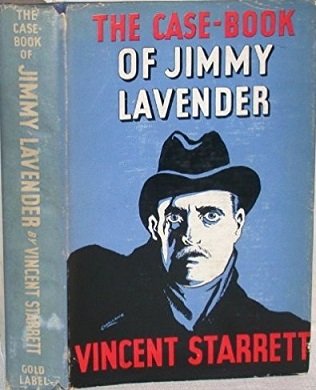 {August of 1948 saw the neighborhood rapscallions, hot and sweaty after a hard day of play, gathering at the corner newsstand before heading home. Nickels and dimes at the ready, they perused many a garish pulp SF cover before making their selections. Astounding (1930-present, now Analog) was always at the top of their list. As always, in 1948 it was a monthly. Famous Fantastic Mysteries (1939-53) always rated a second look for its colorful covers, and in 1948 it was a bi-monthly. Planet Stories (1939-55), always a favorite and not to be outdone with its own colorful, sometimes garish covers–along with what would turn out to be some classic fiction (note the Ray Bradbury story on this issue’s cover)–was a quarterly in 1948.} 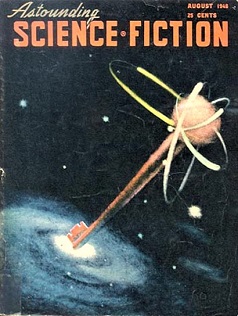 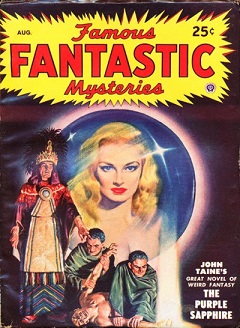 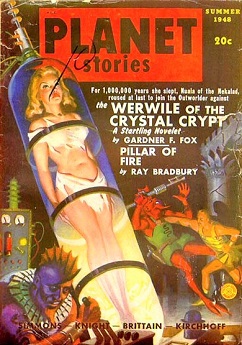