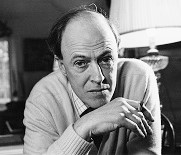 The story takes place in British controlled colonial India and centers on two men working there, one of whom is an outright, disgusting bigot. The bigot, Harry Pope, is played by William Conrad, and his friend Timber Woods is played by Jack Webb. Visiting Harry, Timber finds him in his bed, panicked and sweating in his covers, telling Timber there is a deadly snake–a krait–resting on his stomach beneath the blankets. Timber is told to summon an English doctor, for Harry wants nothing to do with an Indian doctor. The English doctor is unavailable, thus as a last resort the Indian doctor is brought in. Several methods are used to try to get the snake to leave, all unsuccessful. Harry is given some antivenin as a precaution. I won’t reveal a further, and final, solution, save to say that Conrad’s performance is one of his best, and the fear he brings to his role almost palpable. His unrepentant hatred of those he considers his inferiors makes this strong tale of overt bigotry even more powerful today. In 1958 the story was adapted for television as one of the episodes of Alfred Hitchcock Presents and was directed by Hitchcock himself. 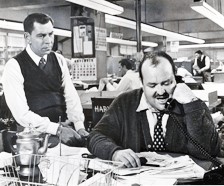 William Conrad (1920-1994) was one of radio’s most ubiquitous voices for many years, both as narrator and actor. By his own count he appeared in 7,000 radio roles (and indeed, was the “voice” of Escape, his deep baritone unmistakable), but at least one source can verify a mere 2,000. That Conrad was a fighter pilot in world War II might have had something to do with any exaggeration. Jack Webb (1920-1982), known primarily for his television show Dragnet (first as a radio series as many early TV productions were), was a good friend of Conrad’s, and both would appear in many radio and TV projects.

From the excellent OTR site The Digital Deli Too entry on Escape: “Conrad’s long association with Jack Webb produced some of radio noir’s most memorable moments as well. Conrad was heard in every Jack Webb production he ever mounted, and the chemistry between the two of them is one of radio’s greatest pairings. From Johnny Madero, Pier 23, to Dragnet–and beyond, the verbal interplay between Conrad and Webb always made for fascinating radio–and film.

“Conrad possessed an amazing gift for creating bone-chilling radio characterizations of a seemingly endless array of toughs, gangsters, hard-boiled cops, corporate magnates, and hundreds of other commanding, self-assured, scoundrels and heroes alike. Those roles created a radio following for him rarely equalled in radio history. He was inducted into the Radio Hall of Fame in 1997.”

A final note on this adaptation of “Poison”:  we are told that the deadly krait is a small snake, maybe 3-4 inches in length. Cursory research reveals that while there are numerous varieties of krait, they run to a good 1-1.5 meters (3-4.5 ft.), while at least one species is known to attain a length of 6 feet. Nevertheless, this possibly factual error does not diminish the strength of the story in any way, the perfect title asking us to consider what is more poisonous–the poison of a snake or the poison of bigotry…and maybe the little snake here was a baby krait. 🙂

{Late July of 1950 would find the neighborhood gang playing baseball in the field down the way, but on the walk home they would stop at the corner drug store for a cold fountain coke and peruse the magazine racks for their favorite reading hits, several of which are shown below. Astounding held strong with its monthly schedule, as did Planet Stories with its quarterly schedule and Startling Stories with its bi-monthly schedule. Looking at the covers, our little All-Stars to be were in for some good reading.} 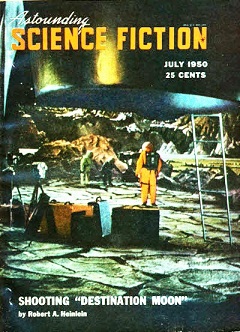 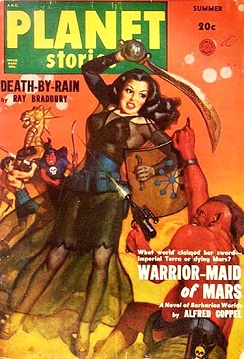 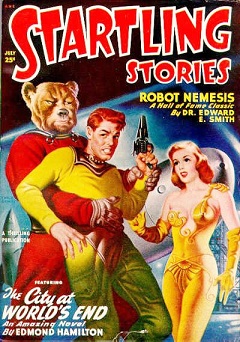