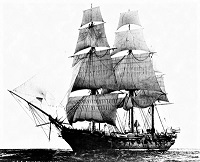 Escape (1947-54) aired “Clear for Action” on June 14, 1953 as the 200th of its 251 episodes. A spinoff of the highly popular radio show Suspense (1942-62), Escape produced (according to one source) 251 episodes of which 241 were unique stories, plots, or scripts (the remaining 10 being rebroadcasts of earlier shows and not different versions of previous episodes). Escape concentrated on adventure tales, some with an SF/F theme, though the straight adventure tale set in exotic locales was its meat and potatoes.

“Clear for Action” takes us to the early 19th century and a naval confrontation in the Caribbean. A US naval frigate is given orders to head for an area in the West Indies and capture or sink French privateers (i.e. straight up pirates in some cases) who are capturing merchant seamen and their ships, disrupting trade and otherwise wreaking havoc. How the battle plays out depends on sly maneuvering and a chancy scheme, and even involves the hint of romance at the very end. The ubiquitous William Conrad (1920-1973, photo top right) not only hosts and narrates the episode as he did many Escape shows, but plays the lead role (as he also did quite often).

Due to historical information accidentally discovered while putting this episode together, it seems clear that the setting and circumstances of this radio play are drawn from the historical record. Freely adapted with fictional names, “Clear for Action” might be a retelling of the adventures of the historical US naval frigate USS Constellation (and how’s that for a SFnal name?). Taken from the webpage historicships.com, we learn much about the Constellation‘s history and see that its missions to intercept French privateers mirror the fictional story in “Clear for Action.” From the entry on the Constellation: “The first Constellation, a frigate designed by naval constructors Joshua Humphreys and Josiah Fox whose plans were altered in the execution by builder, David Stodder, and the superintendent of shipbuilding, Captain Thomas Truxtun, was built at the Sterrett Shipyard, Baltimore, Md., and launched on 7 September 1797.

“Constellation convoyed American merchantmen at the outset (June through August 1798), before sailing for the West Indies to protect United States’ commerce in those waters. Under the command of Captain Thomas Truxtun, she sailed for the Caribbean in December 1798. Subsequently, on 9 February 1799 she received her baptism of fire in capturing the French 40-gun frigate L’Insurgente in battle off Nevis, West Indies, in a hard fought victory, and bringing her prize into port. In succeeding months, she also encountered and seized two French privateers, Diligent and Union.”

The USS Constellation (image top left) enjoyed a long and storied career, actually sailing around the world in the 1840s. It was docked and finally broken up in Norfolk, VA in 1853. Listen now to “Clear for Action,” a story that could very well be an adaptation of one of  the frigate’s earliest, and most successful, missions.

{June of 1953 found the neighborhood gang fresh out of school and ready for a summer vacation’s worth of SF reading without the nagging guilt of neglecting homework in favor of their favorite reading. A bright and sunny Saturday morning found them at the corner drugstore jostling one another for first pick of their favorite magazines. Astounding SF (1930 to present, now Analog) was first to find eager hands as one of the regular monthlies not to be missed. The Magazine of Fantasy & Science Fiction (1949 to present) saw its first full year as a monthly in 1953, though its first monthly issue had an August 1952 cover date. Raymond Palmer’s Other Worlds (1949-53) never managed a reliable schedule, though its last 10 issues were monthly. It published only 31 issues from November 1949 to July 1953, but despite the stellar names gracing its cover and another great cover illustration by the incomparable Hannes Bok, the June issue below would be its next to last.} 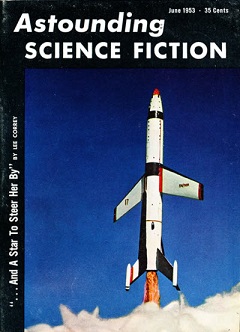 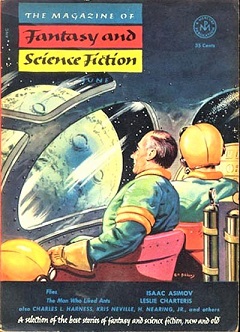 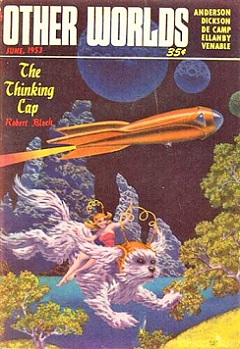