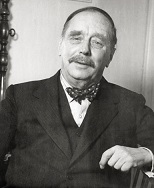 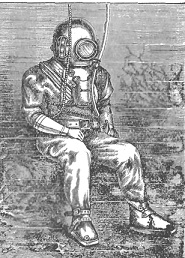 Escape (1947-54) aired “Jimmy Goggles the God” on March 7, 1948 as its 40th episode. Source accounts vary as to the number of episodes, but approximately 251 episodes were produced (201 unique, i.e. not rewritten and then rebroadcast), with all but a few still in circulation. This H. G. Wells (1866-1946) short story first appeared in the November 1898 issue of The Cosmopolitan.

Escape was a spinoff of Suspense, one of the classiest, well-produced and acted adventure-drama radio series in the history of radio. It ran from 1942-62, and after establishing its broad-based listenership and reputation found itself inundated with so many top-flight scripts, scripts it would never have the opportunity to produce, that (to make a long story short) Escape was the result. Hardly a step down from Suspense, Escape soon established itself with an even more focused approach to action and exotic adventure, dramatizing literary classics (from such as Rudyard Kipling, Sir Arthur Conan Doyle, Edgar Allan Poe, Ambrose Bierce, Nelson Bond, Ray Bradbury, Eric Ambler, Jack London and others) while at the same time treating its audience to many brand new tales, a fair number of which have become classics.

“Jimmy Goggles the God” is set in the South Pacific where we find fortune hunters setting up shop and diving for a mountain of gold they have come upon in a sunken wreck. The cannibalistic natives on the island from which our small band is working have other ideas, however, and have killed several of them. The secret to gaining their trust–or perhaps rather their respect or fear–forms the crux of the tale. Do any of the treasure-seekers survive? Do they perhaps get the gold they are willing to risk their lives for, and escape? Or neither? Listen to this well-written adaptation of the H. G. Wells story to learn the ending Wells gives us; it is quite rewarding and rich with irony.

{After listening to this rousing tale from Escape in March of 1948, the neighborhood gang couldn’t wait for Saturday and their trip to the local newsstand. Among the many selections from which they had to choose were the trio below. One of the new kids on the block who also loved reading and collecting SF pulps, was also an avid fan of the numerous detective magazines, and so went with one of his favorites, G-Men Detective. This long-lived pulp began as a monthly in 1935 but in 1940–just before the war–it went bi-monthly, only to end its days with an erratic schedule (sometimes quarterly, at others it squeezed out five issues a year) with but one issue each in 1952 and 1953. Startling Stories remained solid with its bi-monthly schedule, and as always there was the old reliable Astounding Science Fiction, holding strong to its monthly schedule.} 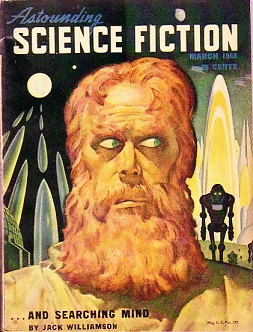 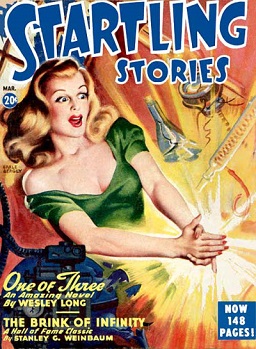 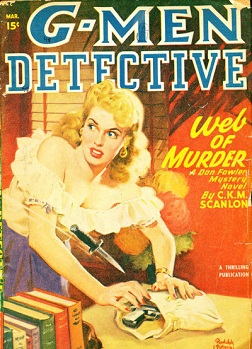