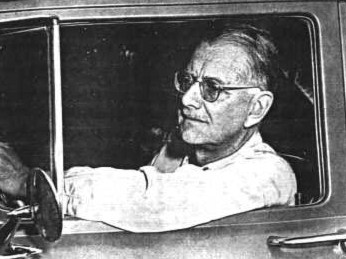 George R. Stewart (1895-1980) spent most of his life as an English professor at the University of California, Berkeley, though he would travel widely, driving back and forth across the country several times during the 1940’s in his capacity as a toponymist (one who studies place-names and their origins). Earth Abides was published in 1949, won the first International Fantasy Award in 1951, and has seen at least one new edition every decade since it first saw print sixty years ago. In his only SF work, Stewart shows us a post-apocalyptic Earth that has been devastated by an unknown airborne plague that wipes out all but small pockets of Mankind. He posits that an imbalance in the ecology caused by Man has led to the plague, which is a statement of one of the book’s two primary themes:  the ecology and population control.

The show’s producers thought so highly of the book that they felt the usual half-hour treatment wouldn’t do the story justice, so they split the dramatization into two episodes.  Escape (1947-1954), one of radio’s most popular and well-produced shows, premiered “Earth Abides, Part I” on November 5, 1950, and “Earth Abides, Part II” a week later on November 12, 1950. This excellent dramatization traces the life of one Isherwood Williams as he copes with the world-wide disaster from its inception, through his founding of a family, then a small community of survivors, until his death many years later and the lessons he bequeaths to his son. A quintessential example of the cautionary SF tale and one of the genre’s early classics, it is a touching, sad, yet cold and ultimately brutal tale, as one isolated group strives to survive against the many unforeseen dangers of a crumbling, ravaged world for which their modern lives had never prepared them.