Dimension X (1950-51) aired Murray Leinster’s “The Lost Race” on May 20, 1950. It originally appeared in the April 1949  issue of Thrilling Wonder Stories and tells the story of space explorers shipwrecked on a planet where they find the ruins of an ancient civilization some 100,000 years old. Will they find marvelous scientific wonders or hidden and unimaginable dangers? Or both? An otherworldly mystery made to order for radio is “The Lost Race,” as the crew must discover the fate of the lost race before it can determine its own. Not wanting to give any overt spoilers, but the true SF aficionado will spot more than a passing similarity to a certain classic SF film from 1956.

Sam Merwin, Jr. (1910-1996) was the editor of Thrilling Wonder Stories from 1945-51, Along with Leinster’s “The Lost Race” he put together one classic lineup with the April 1949 issue. Other fiction contributors to this issue were: 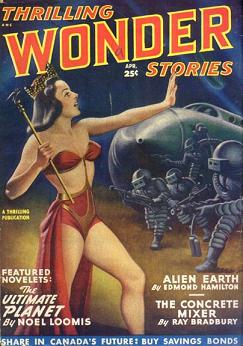 “The Ultimate Planet” by Noel Loomis
“Operation Pumice” by Raymond Z. Gallun
“Quest of the Starhope” by Leigh Brackett
“Alien Earth” by Edmond Hamilton
“Quite Logical” by Rog Phillips
“The Hierophants” by Margaret St. Clair
“On the House” by Noel Loomis (as by Benjamin Miller)
“The Concrete Mixer” by Ray Bradbury
“All Good BEMs” by Frederic Brown
“The Box” by James Blish

Not to give short-shrift to the others, but Brackett, Hamilton, Bradbury, Brown, Leinster, St. Clair, and Blish–all in one issue? Wow.

Listen now to Murray Leinster’s “The Lost Race” as dramatized by Dimension X over 62 years ago.