[Please welcome returning guest-host Jonathan Sherwood as he brings us one of the very few episodes of Dimension X we have yet to showcase (either under the Dimension X program title or those redone as early X Minus One episodes). Jonathan writes of himself that his “love of old radio dramas began when he fell asleep each night listening to The CBS Radio Mystery Theater. These days he writes his own fiction, which has appeared in Asimov’s, Analog, and others, and he’s collected thousands of radio dramas that he still listens to as he falls asleep.”]

Dimension X (1950-51) proved it was cool before being cool was cool, by airing an adaptation of Kurt Vonnegut’s very first short story on April 22, 1950, less than three months after it was published in Collier’s Weekly magazine. The episode, “Report on the Barnhouse Effect” is the third episode of Dimension X’s 50-episode run (though a few of the 50 were rebroadcasts from earlier original airings), and predates Vonnegut’s Slaughterhouse Five rise to fame by more than 16 years.

Like Slaughterhouse Five and many of Vonnegut’s works, “Report on the Barnhouse Effect” is a commentary on the state of modern war and politics told through a thin veil of science fiction. Vonnegut’s views of war were shaped by his time both as a soldier on the battlefield and as a prisoner of the second world war. He has remarked that his time as a prisoner in Dresden during the Allied bombing of the city that left it in ruins had significantly shaped his view of the horror and folly of war.

After the war, Vonnegut (1922-2007, photo top right) returned to the United States at the age of 22 and continued to serve in the Army, typing discharge papers for other soldiers. He later supplemented his income as a reporter for the City News Bureau of Chicago, and eventually became a full-time technical writer for General Electric. It was while working at GE as a writer that Vonnegut wrote and sold his first work of fiction, “Report on the Barnhouse Effect,” at age 27.

The story follows a professor, Arthur Barnhouse, who has discovered a mental ability he calls “dynamopsychism.” In essence, Barnhouse can affect objects anywhere in the world through thought alone. At first, he thinks of this as a tremendous boon to society, but once the U.S. government hears about it, it immediately seeks to weaponize the power, since whoever wields this power could wreak devastation on anyone or anything anywhere in the world by thought alone.

Barnhouse goes on the run, and as the world powers hunt him, spies from all countries publish information about enemy strongholds and stockpiles for Barnhouse to see, and which Barnhouse destroys when he unleashes his dynamopsychism on them.

While the story is an enjoyable action-adventure of a cat-and-mouse chase between government agents and a professor with a killer mind, it’s also a very real commentary on the growing nuclear arms race of the time. Dynamopsychism, initially believed by its creator to be a tremendous benefit to humanity just as nuclear power appeared to be to its discoverers, turns into one of the worst possible weapons imaginable if it were to proliferate—again, just like nuclear weaponry.

It’s interesting to note that this story was published in February of 1950, and that because of the reception “Barnhouse” received, in part helped by the Dimension X episode, the editor of Collier’s Weekly urged Vonnegut to write another short story. Vonnegut wrote “Thanasphere,” which Collier’s published in September of that same year. By January 1, 1951, less than a year after his first short story publication and eight months after this episode aired, Vonnegut quit GE and became a full-time writer.

{This episode of Dimension X aired on a Saturday evening in April of 1950, which meant that after church the next morning the neighborhood gang changed from their Sunday finest and headed for the nearby newsstand. Their tastes proved eclectic this particular visit, as the magazines below proved. Adventure (1910-71) was begun to hopefully cash in on the success of Argosy, which by 1910 was selling hundreds of thousands of copies each issue. The difference Adventure brought to the table was that rather than featuring a broad spectrum of stories ranging from (as one source put it) “danger to romance,” as Argosy did, it concentrated on stories featuring danger and thrills. Though it held to a monthly schedule in 1950, for some reason it omitted its December issue. The Avon Fantasy Reader (1947-52) was a rare treat, in that it published only 18 issues in its five year life (only 3 issues per year from 1948-51, with 5 in 1947 and only one in 1952) and was therefore welcomed for readers wishing to catch up on fantasy classics from days gone by. And it brought to a new generation of readers some fine material indeed from the likes of (to name but a few) Robert E. Howard, Clark Ashton Smith, Sax Rohmer, A. Merritt, William Hope Hodgson, August Derleth, C. L. Moore, H. P, Lovecraft and many more. The issue below was the first of three in 1950 and was #12 of the eventual 18 issue run. Much credit is due legendary founder of DAW Books Donald A. Wollheim for editing the series while an editor at Avon Books, a pioneer in the paperback book format. Other Worlds (1949-53) began its rather brief life as a fictional counterpart to publisher/editor Raymond A. Palmer’s Fate magazine which was devoted to the UFO phenomenon. After encountering some financial setbacks (not uncommon with any number of Palmer’s magazines) it would fold with its July 1953 issue. The first four issues of 1950 were bi-monthly with the last three (Sept.-Nov.) going monthly, for a total of 7 issues in 1950.} 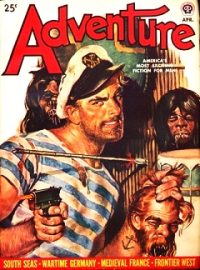 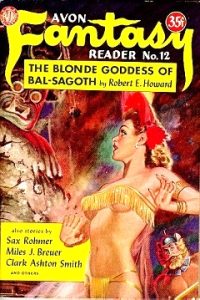 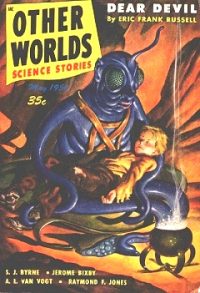