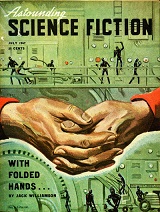 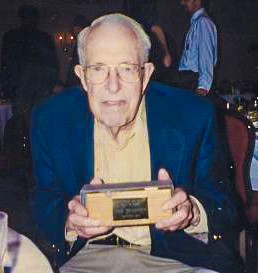 Dimension X (1950-51) aired “With Folded Hands…” on April 15, 1950 as the second of its fifty episodes. Jack Williamson (1908-2002) saw his novelette first published in the July 1947 issue of Astounding Science Fiction. He then expanded it to novel length where it ran as a three-part serial in the March, April, and May 1948 issues of Astounding Science Fiction under the title “And Searching Mind.” 1949 saw its first book publication from Simon & Schuster under the more familiar title of The Humanoids. It is one of the most anthologized stories in science fiction history and is one of the “essential” must reads for any science fiction fan or scholar of the genre.

The story concerns a businessman who sells androids on consignment at a time when the market is saturated with “androids, mechanoids, electronoids, automatoids, and ordinary robots.” He is worried he won’t be able to pay for his next shipment when he spots an ad proclaiming:

“To Serve and Obey,

And Guard Men From Harm.”

Soon enough the new generation of “mechanicals” (imported en masse from the planet Wing IV) has taken over the market. They are able to perform any and all tasks and seemingly are without fault. A problem arises when they take their programming and slogan much too seriously, and “To Serve and Obey, And Guard Men From Harm” removes human choice in all matters they deem not in humankind’s best interests. Those not bending to their will are lobotomized into passive acceptance. A stranger comes to board at the businessman’s home who knows a little something about this new generation of mechanicals–these humanoids–and his knowledge gives hope for those who oppose the oppressive control of these supposedly benevolent guardians. But is it enough?

In his introduction to the story in Isaac Asimov Presents the Great SF Stories 9:1947 (DAW, 1983), co-editor Martin H. Greenberg writes of Williamson that “”With Folded Hands…” reflects his long interest in the question of freedom vs. social control…”

Listen now to this excellent adaptation of SF Grand Master Jack Williamson’s darkly cautionary tale–which ends on a note eerily similar to the bleak ending of a book that would see print in 1949, two year’s following the publication of Williamson’s original novelette–George Orwell’s 1984.

{After listening to “With Folded Hands” in April of 1950 with its cautionary message, our rowdy neighborhood gang headed for the local newsstand for a little more positive, upbeat reading to fire their imaginations. As always, there was a lot to choose from, the trio of magazines below among their choices. Astounding Science Fiction (1930 to the present, now Analog, the complete title transition first appearing on the cover of the October 1960 issue) was as reliable as ever with its monthly schedule. Famous Fantastic Mysteries (1939-53) had always been an erratically published magazine, with anywhere from three to nine issues in any given year, with 1950 seeing but five. Thrilling Wonder Stories (1936-55) at this point in its history (1947-52) was a bi-monthly magazine.} 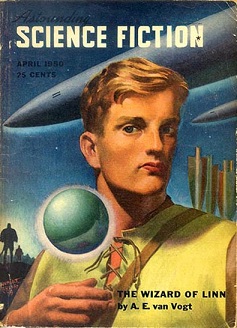 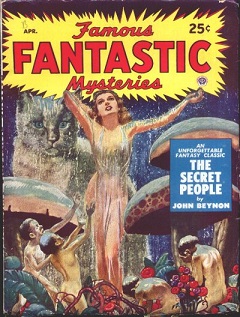 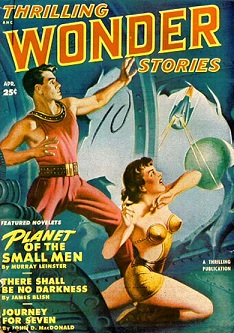