Dimension X aired “Untitled Story” on August 23, 1951. Frank M. Robinson (1926-2014) saw his novella published in the September 1951 issue of Astounding Science Fiction (cover at left), so it was broadcast at the same time as that issue was already on the newsstands. Good timing to say the least.

Robinson wrote 16 novels, three of which were made into movies. His 1956 novel The Power was made into the 1968 film of the same name. 1974 saw his co-written novel with Thomas N. Scortia, The Glass Inferno, combined with Richard Martin Stern’s The Tower, and made into the 1974 film The Towering Inferno, and again with Scortia he co-wrote The Gold Crew (1980), which NBC turned into a miniseries in 1986 retitled The Fifth Missile.

A lifelong fan of the pulp magazines he grew up with, Robinson began collecting them in earnest in the 1970s, amassing one of the largest collections in the world, estimated at 10,000 magazines. A few years prior to his death the collection was placed at auction. Openly gay, Robinson moved to San Francisco in the 1970s and became a speechwriter for Harvey Milk, a leader in the gay community who would later be assassinated in 1978 while a member of the city Board of Supervisors. Robinson wrote Milk’s famous “Hope” speech, and along with Scott Smith, Robinson was named co-executor of Milk’s last will and testament. In 2009 Robinson was inducted into the Chicago Gay and Lesbian Hall of Fame.

The story behind the title of “Untitled Story” goes something like this:  When Robinson submitted the story to John W. Campbell at Astounding, he didn’t have a title for it, figuring if the story sold Campbell would supply the title. Surprisingly, and for some unknown reason, Campbell retained Robinson’s non-title title of “Untitled Story,” and thus it has remained since its appearance in 1951, some 66 years ago now. The story itself is a blend of SF and the hard-boiled detective genres. The secretly dying mayor of a city has purchased for a large sum of money a supposed “elixir of life” from a person who may be on the up-and-up or a charlatan. The mayor calls in the services of our protagonist, a private investigator, to check out the enigmatic man who sold him the immortality elixir in order to determine if the vial of liquid he holds contains poison or the real thing (after all, a mayor is a politician and politician’s have enemies). One thing leads to another as they do in all good mystery stories, with the SF element taking a more front stage presence only near the end of the tale. “Untitled Story” is a solid SF mystery, and while it posits nothing new and employs a standard SF trope for its basis, it succeeds at what it tries to do–tell an entertaining story.

{August of 1951 saw the neighborhood gang squeezing as much as they could out of the waning days of their summer vacation. Sweaty and still breathless from a hot day’s play at the local field and a contentious baseball game, they found themselves, bats on shoulders and gloves in hand, at the local newsstand for hits of their favorite reading material. The Magazine of Fantasy & Science Fiction (1949-present) was becoming a new favorite and was a bi-monthly in 1951. Future (1950-54), in its current incarnation (it went through numerous name changes and was combined with other titles over the years), was also a bi-monthly in 1951. Ray Palmer’s Other Worlds (1949-53) also went through a number of changes during its lifetime and managed 7 issues in 1951.} 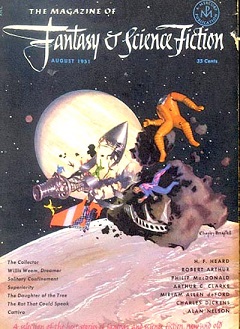 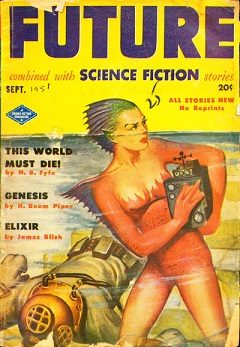 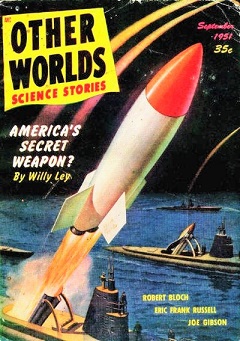