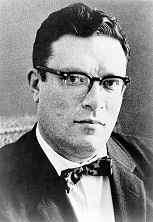 Dimension X (1950-51) aired “Pebble in the Sky” on June 17, 1951 as its 37th episode. Isaac Asimov (1919-1992, photo at right) first wrote the novel as a shorter work in 1947 for Startling Stories under the title “Grow Old with Me,” and though the magazine’s editor had specifically requested it, it was rejected as not being right for the magazine. It was also then rejected by none other than Asimov’s usual editor John W. Campbell, editor of Astounding SF. Expanded to novel length it was eventually published by Doubleday in January of 1950 (cover at left from the 1st edition hardcover). Set in Asimov’s Foundation universe, Pebble in the Sky is the first of three early 1950s novels known as the Galactic Empire novels (The Stars, Like Dust, 1951, and The Currents of Space, 1952, being the other two). Pebble takes place long after mankind has seeded the galaxy, and Earth is now a decrepit, radiation-ruined backwater planet of no consequence, where near the center of the galaxy the planet Trantor is now the seat of the Empire, which holds sway over 200 million worlds. However, there are those on Earth wishing to restore it to prominence, and Pebble tells the story of internal political movements, characters with diverse viewpoints and motives, and a scientific deception played out in service to those wishing to elevate Earth’s status.

Attempting to capture the depth, complexities, and nuance of an entire novel in a 25-minute radio adaptation is difficult, to say the least. That said, while Ernest Kinoy did an admirable job with his script, all things considered, there were substantial changes made from the novel. A major character has been deleted, along with a time travel element, and the ending is much more downbeat than that of the novel. So for Asimov purists familiar with the novel, this adaptation might leave something to be desired. Those not having read the novel will probably enjoy this dramatic, well-acted radio play much more, as their pespective and expectations will be quite different.

Of interest as side notes, while the planet Trantor, the powerful seat of government in the Galactic Empire, plays a major role in the original Foundation trilogy (1951-53) and is a familiar name to anyone having read any of these classic novels, and though it had been mentioned in earlier short work prior to Pebble in the Sky, this was the first time it had been mentioned in a novel-length work. And fans of Logan’s Run (1967 novel, 1976 film) might find it interesting that in the novel and movie of the same name society enforces population control by means of requiring the death of anyone over the age of 21 (the novel), or 30 (the film). Pebble in the Sky predates William F. Nolan’s and George Clayton’s method of population control in Logan’s Run by enforced death by some 17 years, though Asimov sets his “early retirement” from society at age 60, as you will hear in this dramatization of Isaac Asimov’s Pebble in the Sky.

{Their first trip to the corner drugstore to pick up June’s top-tier selections not being enough (and not withstanding that they spent most of their summer months outdoors) the neighborhood gang made a return trip and grabbed more exciting adventure-filled SF pulps. fantastic Adventures (1939-53) was a monthly in 1951. Future (1950-54) was holding steady with a bi-monthly schedule, and an old favorite, Planet Stories (1939-55), upped its game by dropping its quarterly schedule at the end of 1950 and going to a bi-monthly schedule in 1951.} 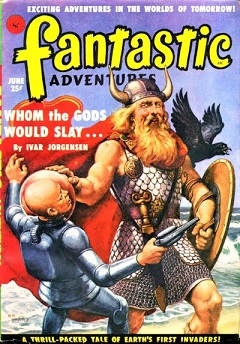 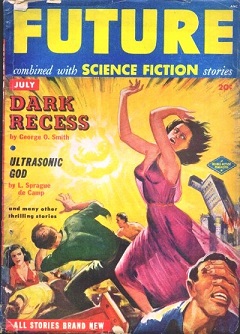 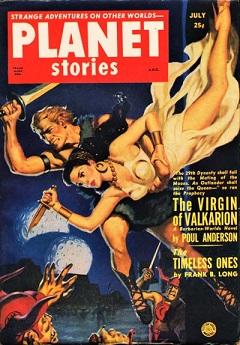