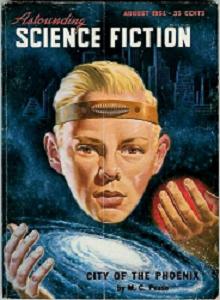 Dimension X aired Clifford D. Simak’s “Courtesy” on July 26, 1951. Unlike many Dimension X and X Minus One episodes, “Courtesy” aired simultaneously with its first print appearance, the story appearing in the August 1951 issue of Astounding Science Fiction. It tells of the second expedition to the planet Landro, and the accidental destruction of the serum the Earthmen need in order to immunize themselves from an indigenous plague, a plague from which the natives are immune but which is deadly to Earthmen. In trying to get the natives to divulge the secret of their immunity, they fail on all counts, the Earthmen’s condescending, arrogant attitude toward the natives not the best of diplomatic approaches.

As usual with many a Clifford Simak (1904-1988) story, he imparts a moral dimension to this one, a lesson spacefarers would do well to learn as they encounter alien species across the vast regions of the universe. In this case, there are plagues…and there are plagues, a lesson these spacemen must learn the hard way.

“Courtesy” is not the only Simak story to be set on the planet Landro. His May 1953 Galaxy follow up story “Junkyard” was dramatized for an episode of X Minus One, a fine tale we offered here, back in 2009.

1951 was a very good year for both novels and collections, some of which include Time and Again by Clifford D. Simak, The Martian Chronicles by Ray Bradbury, The Weapon Shops of Isher by A. E. van Vogt, The Day of the Triffids by John Wyndham, The Stars Like Dust by Isaac Asimov, The Sands of Mars by Arthur C. Clarke, Between Planets by Robert A. Heinlein, and City at World’s End by Edmond Hamilton.

On the short fiction side 1951 also saw some noteworthy entries, among them Arthur C. Clarke’s “The Sentinel,” first published in a one shot magazine titled Ten Story Fantasy for Spring 1951. The magazine story title was “Sentinel of Eternity,” and is the story upon which the now iconic film 2001: A Space Odyssey was based. Other notable short fiction from 1951 includes C. M. Kornbluth’s “The Marching Morons” (Galaxy, April), F&SF co-founder Anthony Boucher’s “The Quest for St. Aquin” (New Tales of Space and Time), Fritz Leiber’s “A Pail of Air” (Galaxy, December), and Ray Bradbury’s “The Fire Balloons” (Imagination, April).

{After listening to the dire exploits of the space crew on the planet Landro in this Dimension X episode, I can easily imagine youngsters–both boys and girls–with bright imaginations, getting together for a trip to the corner drugstore on a bright Saturday afternoon to spend their nickels and dimes on colorful adventures created just for them, a few possibilities of which are shown below.} 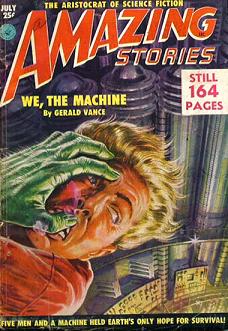 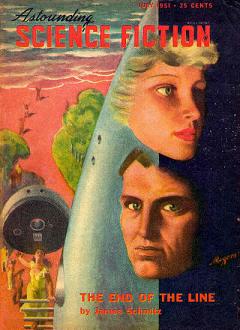 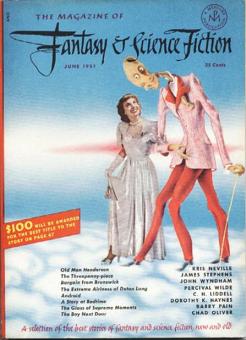