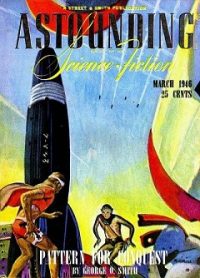 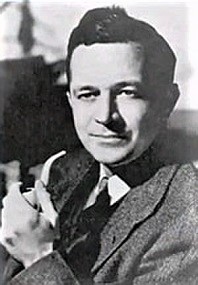 [Editor’s Note:  Please welcome this week’s OTR guest host, Jonathan Sherwood, who selected and did the write up for the episode, minus the usual bit about the pulp magazines following the audio presentation. Jonathan writes of himself that his “love of old radio dramas began when he fell asleep each night listening to The CBS Radio Mystery Theater. These days he writes his own fiction, which has appeared in Asimov’s, Analog, and others, and he’s collected thousands of radio dramas that he still listens to as he falls asleep.”]

Dimension X (1950-51) aired “A Logic Named Joe” on July 1, 1950 as the 13th of its 50 episodes, one of the few episodes of the series to be aired live instead of prerecorded. An interesting historical detail is that the episode was delayed 30 seconds so the NBC Newsroom could report that U.S. troops had begun moving into Korea, in what would be known at the time as the “Korean Conflict.” That news clip survives in most recordings of the show today.

The short story first appeared in the March 1946 issue of Astounding Science Fiction (cover top left) under the name of Will F. Jenkins (1896-1975, photo top right), who is better known by his pseudonym, Murray Leinster. The previous Dimension X episode offered here was back in 2017, so it was felt high time to showcase another.

Jenkins/Leinster was astonishingly prolific, publishing hundreds of short stories and dozens of science fiction, western, mystery, and romance novels from the mid-20s to the late 60s. In 1954 alone he published five novels.

“A Logic Named Joe” is presented as a lighthearted comedy of how a malfunctioning “logic,” what we’d call a computer today, leads to a few days of worldwide panic. But what makes this all-but-forgotten story so interesting is that it not only presages the idea of the internet in a surprisingly accurate manner, it did so by showing how AI (artificial intelligence) could draw correlations between disparate pieces of data to draw conclusions that would seem impossibly unlikely to us sporting limited human brains. We’re just now using AI simulators to design automobile frames in shapes no human designer would dream of, and AIs are now conceiving of new materials that meet required characteristics.

The Dimension X story follows Jenkins’ original work fairly closely for an adaptation. The new must-have gadget for your home is a logic, which functions as a computer, a TV, and phone. The logics connect to a central hub that houses all known information about absolutely everything—but this central hub does not allow logics to relay harmful information, such as how to kill your neighbor’s dog.

The story begins as one logic, nicknamed “Joe,” appears able to circumvent this safety feature and spreads this workaround to all logics. In no time at all, people are googling all kinds of information and everyone is becoming suspicious of the actions of everyone else. Granted, this is not exactly what has happened now that the actual internet has allowed everyone access to any kind of known information. But… if new types of AI begin discovering peculiar things that seem completely illogical and unfathomable to us humans—such as microwaving hot chocolate for exactly 33 seconds with a small piece of styrofoam to produce a completely undetectable toxin—our society, which currently argues over who won an election, might find itself suspicious of absolutely everyone, including a husband who brings you tepid hot chocolate.

Enjoy a science fiction episode that is somehow both prescient and silly. Maybe it’s a warning about the dangers of artificial intelligence from a man who predicted the modern internet. Or maybe it’s just a goofy story of a poor repairman who has to save his marriage from his lovesick ex, and save the world from a single malfunctioning logic.

{With this episode of Dimension X scheduled to air on a Saturday evening (July 1, 1950), the neighborhood gang decided to get in the mood by meeting at the corner newsstand to pick up some of their favorite SF magazines. Fantastic Novels (1940-41, 1948-51) featured classic stories from earlier days, some before the SF magazine genre was born. It ran some truly wonderful material by such as A. Merritt, Ray Cummings, George Allan England, and even early Murray Leinster, among others. Little known is that the magazine was edited and the stories chosen by the devoted, much beloved female editor Mary Gnaedinger (1897-51), who also edited Famous Fantastic Mysteries and A. Merritt’s Fantasy Magazine.  It was a bi-monthly in 1950. Super Science Stories (1940-43, 1949-51) was edited for its first few years by Fred Pohl when he was 19. It was run on less than a shoestring (and less than a penny a word) though Pohl was able to acquire some of its stories from his friends, friends like Isaac Asimov and Robert Heinlein who would soon become two of the most important names in the field. The magazine was never regarded as a top-tier publication but historically more of an “interesting” training ground for beginning writers. It was a bi-monthly in 1950. Thrilling Wonder Stories (1936-55) was an integral part of the long gone Golden Age of the SF pulp magazines, capturing the imaginations (not to mention the nickels and dimes) of (mostly) young boys with wild tales of mayhem, adventure, and derring-do told in page-turning prose where it was easy to spot the Good Guys from the Bad Guys, and the story more often than not somehow involved a scantily clad, beautiful young female as at least part of the ultimate story resolution. Much sought not only for its stories but for the beloved authors who penned them, many of its issues (when they can be found) go for a pretty penny at SF conventions. TWS was also a bi-monthly in 1950.} 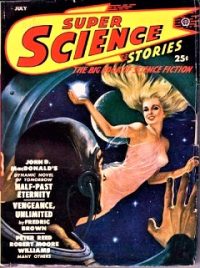 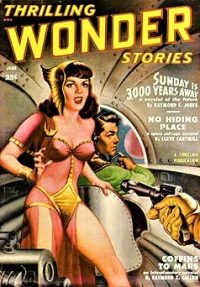