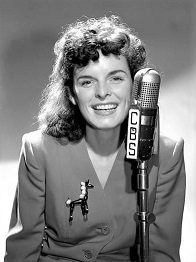 Defense Attorney (aka The Defense Rests, 1951-52) aired “Client Joshua Masters” on April 10, 1952 as the 41st of its 75 episodes. The audition took place in April of 1951 under the working title of The Defense Rests, but when it was given the green light and its first episode aired in June it was rechristened as Defense Attorney. Broadcast on Friday nights, each episode was devoted to righting a wrong, to defending a person unjustly accused–or actually convicted and sentenced, sometimes to the electric chair–for a crime they did not commit. It starred Mercedes McCambridge (1916-2004) as Defense Attorney Martha Ellis “Marty” Bryant. McCambridge was fresh off her Oscar win as Best Supporting Actress in 1949’s All the King’s Men (Oscar winner, Best Picture), and in 1956 she would be nominated again in the same category for her role in Giant. Giant starred none other than Elizabeth Taylor, Rock Hudson, and James Dean (with an all star supporting cast including Rod Taylor, Carroll Baker, Dennis Hopper, and Sal Mineo). Of interest to genre fans, McCambridge was the voice of the demon Pazuzu in 1973’s The Exorcist. Orson Welles, one of the most revered names in early radio and later film, touted McCambridge as “the greatest living radio actress.” Mercedes McCambridge has two stars on Hollywood’s Walk of Fame, one for her film work and the other for her television work, which was extensive, including the following genre credits: Lost in Space (1966), Bewitched (1968), and Amazing Stories (1986).

As a side note, McCambridge was pregnant with her second child (the first died during childbirth) during the first 30 episodes of Defense Attorney. She was a vocal advocate for having children, believing that everyone needed to be needed, and none more so than children. She also strongly believed that having babies should not interfere with a woman’s career, holding the opinion that if she could juggle a radio and film career with having babies, then other women could as well.

“Client Joshua Masters” is an unusual episode for this show, in that it has defense attorney Marty Barrett defending a client after his death, fulfilling a promise she made to her now deceased client before his death. It involves a decent, but very wealthy man and his three wayward, playboy sons, each after their share of the old man’s fortune when he dies. But the old man suspects one of them is out to kill him, hastening the split of his money. This is where it gets interesting. Without giving too much away, the old man and one of his sons are found dead–one murdered and the other thought to be a suicide. But who killed whom? Details of the storyline make possible answers incongruent with the facts and motives, thus proving a hard murder mystery to solve, especially for a defense attorney and not a private investigator or the police who are used to solving crimes. So listen now to the convoluted case of “Client Joshua Masters” to discover whodunnit and how our clever defense attorney Marty Bryant comes to figure it out.

{The morning after listening to this Friday night episode of Defense Attorney the neighborhood gang gathered at the corner newsstand on a bright Saturday morning, there to spend time poring over colorful pulp magazine covers and ultimately choosing which ones to buy and take home with them. Astounding (1930-present, now Analog) always intrigued and was a faithful monthly they’d not missed an issue of for years. One of the gang was taken by the previous night’s radio episode and opted for something in the detective vein, selecting Dime Detective (1931-53) for something different. It had been a monthly for most of its long career, switching to a bi-monthly during 1951, a schedule it would maintain until its eventual demise a few issues later in 1953. The Magazine of Fantasy & Science Fiction (1949-present) was a relative newcomer, but was beginning to attract the eye of new readers with the more literary bent to its stories and fresh approach to cover art. In early 1952 it was a bi-monthly but with its August issue went monthly, a schedule it would continue for most of the next 40 years. With its April/May 2009 issue it returned to bi-monthly (virtually double-sized) issues, a schedule it maintains to the present.} 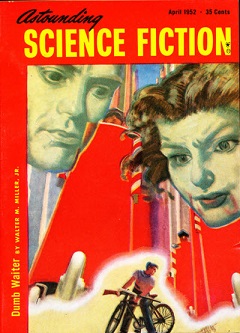 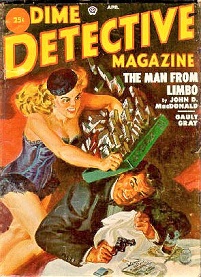 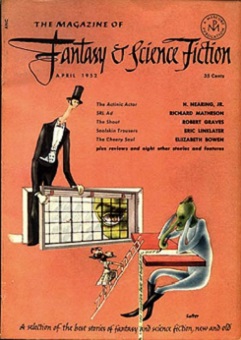