“The Man with the Scarlet Satchel” reads at first like another of the many stories peppering old time radio about the old patriarch of a family who is dying or who has just passed away, while the family gathers around like vultures to see who gets what of the old man’s will. Except in this story the old man has no family—but he does have a will, a nurse and a lawyer/caretaker. Where the story takes off from this opening scenario is fraught with left turns aplenty to keep not only the listener guessing but the main characters as well. Strangeness abounds, including a dead man who has been embalmed and entombed for several days, the enigmatic (and almost forgotten) scarlet satchel, an empty coffin, and…the dark power of true revenge beyond the grave. Sit back and give this one a listen, but be prepared for the unexpected as you learn the secret of “The Man with the Scarlet Satchel.”

{March 6th, 1942 was a Friday when this episode of Dark Fantasy aired. Perfect timing for the neighborhood gang to assault the corner newsstand early that next Saturday morning. Astounding (1930-present, now Analog) was in full bloom in 1942 with relatively new editor John W. Campbell, Jr. getting his editorial chair broken in with many a future classic appearing in almost every issue. It was a must buy and was a monthly in 1942. Startling Stories (1939-55) was a welcomed addiction and fed young imaginations as only a few SF pulps did with regularity. It was a bi-monthly in 1942. Another of those magazines feeding impressionable imaginations regularly was Thrilling Wonder Stories (1936-55), and like Startling Stories would produce its fair share of future, much-beloved classics, many an issue going for a pretty penny in huckster rooms at SF conventions today. It too was a bi-monthly in 1942.] 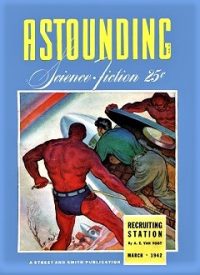 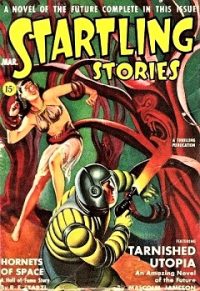