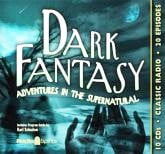 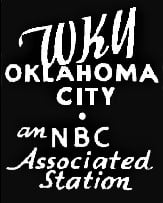 Dark Fantasy aired “The Cup of Gold” on May 8, 1942, just a few months shy of 78 years ago, as its 25th episode out of approximately 31. This is but our 7th episode of this program and only the first since August of 2016, four years ago! While popular with the public and generally considered a fine example of its kind (it featured stories of the supernatural, horror, SF, mystery, and the uncanny and bizarre on a relatively shoestring budget compared to more high end shows like Suspense or Escape), it lasted less than a year, from November of 1941 through June of 1942. The show came out of local station WKY in Oklahoma City and was syndicated through the parent company, NBC. NBC execs thought the show too scary for children below a certain age, so Dark Fantasy was forced to air very late at night, which may account for a smaller listenership than was required to keep the show afloat. Most of the episodes were written by the show’s talented creator, Scott Bishop, who also created such popular shows as The Mysterious Traveler and The Sealed Book.

To illustrate how difficult it is to procure accurate historical information about many radio programs from the Golden Age of Radio, please keep in mind my introductory words just above, and note the inaccuracies brought to light by Old Time Radio historian Karl Schadow, a long time fan of these presentations.

One of Karl’s specific areas of expertise is Dark Fantasy (for which he wrote the booklet notes for the Radio Spirits Dark Fantasy CD linked to at top left). Karl has been helpful in aiding my research for several OTR episodes in the past, along the way making it clear that in far too many instances the “scholarship” surrounding the history of Old Time Radio shows is either blatantly false, unresearched, or non-existent, and that relying on any one, or two, or several sources for information does not guarantee accuracy. Unfortunately, such is the case with the historical notes I wrote for this episode, which Karl points out are just plain wrong (except for the original air date), are the result of shoddy research on the part of the websites from which I gathered the information (there were several), and with the goal being to promote Old Time Radio to new audiences in its proper light, decided to write to set the record straight on some of the history of Dark Fantasy. With permission, I am including Karl’s comments and corrections to my intro notes, and realize that I am (as are all who do this sort of thing) at the mercy of the available sources we find on the internet. In this case, I sourced from three different OTR sites, all of which parroted essentially the same information about Dark Fantasy–which as Karl points out was wrong. So with my gratitude and thanks, Karl corrects the inaccurate information:

Unfortunately, many of those sites use verbatim, the info from the DigitalDeli. It has been a struggle to get others to realize that the articles I wrote which came from the best sources available, (WKY and NBC) have utterly blown away the rest of the competition for Dark Fantasy. Anyhow, here’s the lowdown:

2. Dark Fantasy was not syndicated by NBC but was broadcast as a network venture from November 14, 1941 through June 19, 1942. It originated from WKY and was heard on NBC for its entire network run.

3. The “Too scary for children” aspect is absolute BS. NBC was interested in adding programs to its network schedule to replace dance bands. Moreover, Dark Fantasy aired at 8:30 pm on some West Coast stations.

4. Scott Bishop was the pen name of George Marion Hamaker. He wrote extensively for WKY and previously WIBW (Topeka, KS). I’m not sure how much drama he did later when he moved (in 1944) to WKAT and then WIOD (Miami Beach). There is absolutely no proof that he wrote for The Mysterious Traveler, The Sealed Book, The Strange Dr. Weird or any of the other Kogan/Arthur collaborations.

As you know, the attempt in OTR and sharing my research with you is that I wish to correct all of the inaccuracies out there. Of course, the main goal is to promote OTR itself.

Best,
Karl”
As to “The Cup of Gold,” I can only say that while it begins rather normally (a murder at a golf course), it then quickly escalates into one of the wildest, silliest, corniest, and goofiest pulpish SF forays I can remember posting here. Suffice it to say that we have a number of laughably entertaining happenings tossed at the listener in rapid fire fashion, including, but not limited to:  A collision long in the past between Venus and Pluto creating the hidden planet Vento and its inhabitants, one of whom now intercedes in Earth’s affairs at a golf tournament; interplanetary reincarnation; hypnotic incense; and an ultra-penetrating ray machine. Told with a straight face, this story actually is so bad it ends up being spectacularly entertaining, which is perhaps just what we need while many of us are still relatively quarantined due to the Covid-19 virus. My final thought after listening to this hilarious story was what kind of “incense” the writer was smoking when he dreamed this one up.
Play Time: 24:20

{With the adult world scarcely six months into World War II following the Japanese attack on Pearl Harbor on December 7, 1941, the neighborhood gang in early May of 1942 wasn’t quite sure how to react to the sudden instability and changes in their everyday lives, so retreated into the familiar pages of their favorite SF magazines. Astounding SF (1930-present, now Analog) was a welcome mainstay and a certain purchase, especially when an issue featured a story by A. E. van Vogt, who would become SFWA’s 14th Grand Master in 1996. Astounding was a monthly in 1942. And what better way to add to the silly, pulp outrageousness of “The Cup of Gold” than with a new issue of Captain Future (1940-44). Written by Edmond Hamilton at the suggestion of Captain Future creator Mort Weisinger, I am not alone when I say that the stories were written crudely and fail to hold a candle compared to today’s more polished literary standards. But oh, the colorful unfettered imagination (along with the non-stop action, terrible villains, and galactic Sense of Wonder) imbued in the stories that took young readers to the farthest reaches of the universe and back, making every issue something special. It was a quarterly throughout its short run, publishing only 17 issues, though 10 separate stories would appear in Startling Stories from 1945-51. Planet Stories (1939-55) was one of the long-running popular staples of the romantic science-fantasy magazines, those with garish pulp covers featuring Bug-Eyed Monsters (BEM’s) and half-naked women in distress and sorely in need of rescuing, where plot and logic took a back seat to otherworldy action and adventure. It too was a quarterly in 1942.} 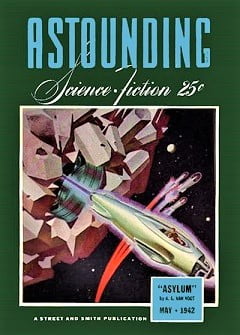 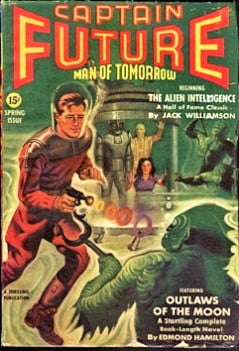 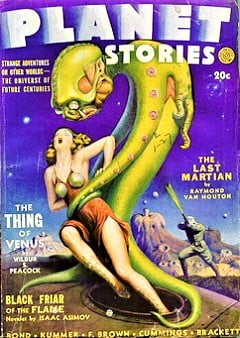