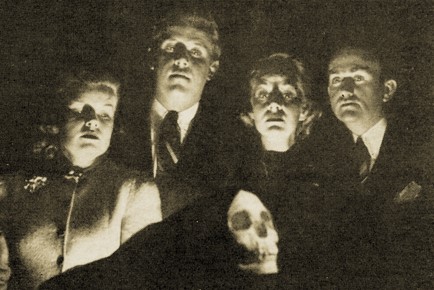 Dark Fantasy aired “Spawn of the Sub-Human” on February 27, 1942 as its 15th episode. Dark Fantasy aired out of WKY in Oklahoma City, OK and would run 31 twenty-five minute episodes from November 14, 1941 through June 19, 1942. Creator and principal writer was the talented Scott Bishop (real name George Hamaker, born in Topeka, KS on May 21, 1912*). Though well-received by critics and listeners for its overall quality, the show lasted but a year. Deemed a little too “chilling” by skittish radio executives (NBC who agreed to syndicate it nationwide, and WKY as an NBC affiliate) for a prime time slot, it aired on Friday nights at 11:30, when children were presumed to be fast asleep.

*Acknowledgment and thanks to Karl Schadow for supplying the information on Scott Bishop’s real name, and place and date of birth, taken from his Program Guide included with Radio Spirits’ Dark Fantasy CD Adventures in the Supernatural.

“Spawn of the Sub-Human” is only the sixth Dark Fantasy episode we have run. I’m not sure I’d judge this one to be one of the best, but it certainly is entertaining on a superficial level. It’s the story of a hi-jacked private plane flight involving an up-and-coming popular singer and her boyfriend cum manager, a mad scientist (think Dr. Moreau), and the attempt to “upgrade” a particular primitive beast. Attempting to enhance or “uplift” various animals or species has been with us for a long time, and manifests itself according to the level of science and/or technology available when the stories were written. Though the scientific knowledge was not as advanced when “Spawn of the Sub-Human” was conceived 70 years ago, the theme was still being explored and riffed upon in many a science fiction tale, so a reasonable amount of forgiveness should be granted its obviously dated underpinnings. That said, after listening to the whole thing I had to scratch my head and chuckle, the phrase “It’s not over until the fat gorilla sings,” springing immediately to mind. So if you’d like to brighten your dreary February days with some levity, here’s your chance. And when I realized that this episode aired on February 27th, 70 years ago to the day it is being re-aired here, I couldn’t resist. Have fun.

{February of 1942 saw America in the opening days of World War II in the Pacific, and one of our neighborhood gang down with a bad cold, so he asked his little brother to bundle up and head for the corner newsstand to buy one of his favorite magazines to tide him over while he was sick in bed. Little brother protested that he coudn’t find big brother’s favorite magazine, so he bought one that looked good to him. Can you guess which of the three below little brother bought, and which two his brother’s friends ended up buying? Astonishing Stories ran from February of 1940 through April of 1943. Edited for the first 9 of its 16 issues by Frederik Pohl, it was a low-paying quarterly magazine. Pohl was then replaced by Alden H. Norton as editor for the magazine’s final 7 issues, whereupon Norton turned around and hired Pohl as assistant editor for the remainder of the magazine’s run. The war time paper shortage was a vital factor in the magazine’s demise, which took place a little over a year following the issue below. Captain Future was perhaps the epitome of the adolescent pulp SF adventure magazine, and was written (almost) entirely by prolific “world smasher” Edmond Hamilton, the ultimate pound-the-keys SF pulpster. The stories were crudely written but full of action, tight scrapes, and space opera scenarios as Captain Future and his gang of loyal compatriots (Grag, a sentient robot; Otho, a synthetic android; and Simon Wright–a disembodied brain kept alive in a box within a serum case) fought evil all over the galaxy. Captain Future lasted 17 (mostly quarterly) issues, from Winter 1940 through Spring of 1944. An interesting bit of trivia is that Mort Weisinger (later a major force within the DC Comics world) created the character of Captain Future at the first world science fiction convention in New York in 1939, and not Ed Hamilton (who would also later write for several DC superhero comics). Thrilling Wonder Stories was the longest running of the three, going through several name changes ending with the one below. It was bi-monthly.} 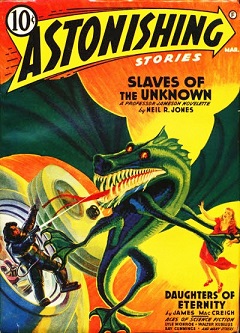 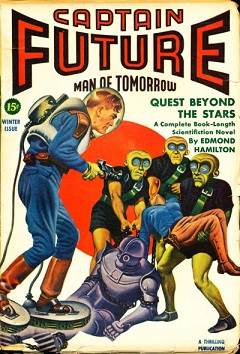 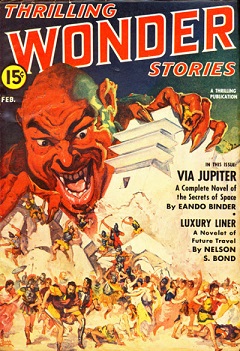