“Yeah, danger is my assignment–I get sent to a lot of places I can’t even pronounce. They all spell the same thing, though–trouble!”

Dangerous Assignment (1949-1953) aired “Ecuador – UFOs” on April 17, 1950 as the 16th of its estimated 167 episodes. We ran our first Dangerous Assignment episode just over a month ago, but looking over different shows and episodes for today I ran across this one by accident, and because of the title thought it would be of interest to SF fans. For those not having heard that initial Dangerous Assignment episode, here is a recap from the intro notes for that episode so new visitors will be up to speed on this international spy/thriller/adventure show.

The program debuted on the NBC network in July of 1949 as a summer replacement and ceased in August after 7 episodes. It was popular enough with listeners and was picked up in February of 1950 to begin its almost 4-year run. It starred popular Hollywood actor Brian Donlevy (1910-1972, photo upper right) as secret agent Steve Mitchell, who was sent as an undercover foreign correspondent by an unnamed U. S. State Department agency on delicate assignments abroad where U. S. interests were involved. His only “agency” contact was “the commissioner,” who would read him in on the background of the situation and then send him off to various hotspots around the globe to rectify the situation. He was rather like an early James Bond character, but much more low-key and without all the gadgets, though the situations were very much in line with some of the problems a Bond character might face. 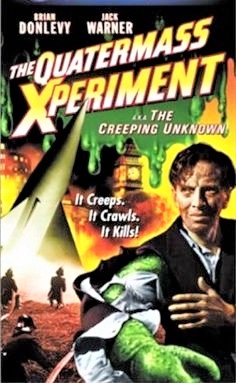 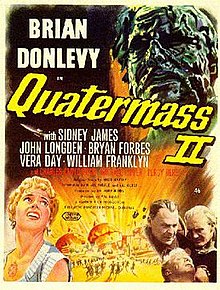 Dangerous Assignment proved popular enough (and through the savvy management of Donlevy himself) that it was given a television show that ran from late 1951 until May of 1952 and comprised 39 episodes. Donlevy himself led quite an interesting life with several SF genre connections, about which more in a moment. For his role as Sergeant Markoff in 1939’s Beau Geste he was nominated for a Best Supporting Acting Oscar, but lost. His career spanned the decades of the 1930s-1960s in both motion pictures (over 80 films), and television, where he played both good and bad characters in numerous popular shows. As to Donlevy’s pre-radio and film careers, in 1916 he answered the Wisconsin Army National Guard’s call to join the Pancho Villa Expedition, and though he was only 14 and lied about his age, he was accepted and served as a bugler. And during World War I he ended up in France with Company C, 127th Infantry Regiment, which was a part of the 32nd Infantry Division. 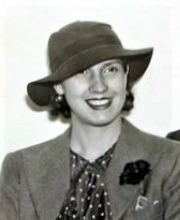 As to Donlevy’s SF connections, there are two worthy of interest. He played the lead role of Professor Bernard Quatermass in the 1955 British film The Quatermass Xperiment (retitled as The Creeping Unknown in the U. S.), then reprised his role as Professor Quatermass in the 1957 British sequel Quatermass 2 (retitled as Enemy from Space in the U. S.). As to his second genre connection of note, it has to do with iconic early horror actor Bela Lugosi (1882-1956). It would seem that our Bela was either a ladies man or had trouble keeping them, for he was married five times. The total elapsed time of his marriage to four of his wives was a mere 8 years. The marriage to his fourth wife, however, was to be for 20 years to Lillian Arch. Lillian Arch (1911-1981, photo at right) was 19 when they married, Bela was 51. They remained married from 1933-1953, at which time they divorced. A partial reason given for the divorce was Bela’s jealousy of Lillian’s close friendship with none other than Brian Donlevy, with whom Lillian worked on both the radio and television programs as a full-time assistant. Bela’s jealousy, warranted or not, ten years after Bela’s death in 1956, Brian would marry Lillian, the fourth ex-Mrs. Bela Lugosi. They would remain married until Donlevy’s death in 1972.

“Ecuador – UFOs” is a blend of the–at the time–fairly recent explosion of news surrounding the UFO phenomenon (Kenneth Arnold’s famus sighting in 1947) and that of the Bermuda Triangle disappearances (first instance attributed in 1945 to the disappearances of the 5 bombers comprising Flight 19 on a training mission, though not brought to public attention until late in 1950–maybe the script writer here knew something no one else did in April of 1950?), transposed to northern South America and Ecuador. An airfreight cargo company has seen a number of its planes go missing amidst sightings of flying saucers/UFOs, and Steve Mitchell’s new assignment is to investigate. What he uncovers forms the crux of the story, though he is as doubting of flying saucers as anyone else until he gets buzzed by one early in the story! Can his disbelief be shaken by this hard evidence, witnessed with his own eyes? Only by listening to this episode will you get your answer.

{Stocked up on all their regular must-buy SF pulps for April, the neighborhood gang made it to the corner drugstore on a Saturday afternoon after a hard day at the nearby makeshift baseball field. Hot and sweaty and sipping cherry cokes as they sat on swivel stools at the fountain, they thumbed through their newest selections. A. Merritt’s Fantasy Magazine was short lived, the first of its five issues appearing in late 1949 and the last in 1950. The first three issues were bi-monthly, while the final two were quarterly. The issue below was the last of the bi-monthly issues. Phantom Detective (1933-53) was monthly through 1941, then a bi-monthly for most of the rest of its run until the last couple of years. The issue below was one of the quarterly issues. Super-Detective (1940-50) never enjoyed a fixed schedule for long and one never knew how many issues in any given year would would show up on the newsstand racks. There would be but three more issues after the one shown below before the magazine folded.} 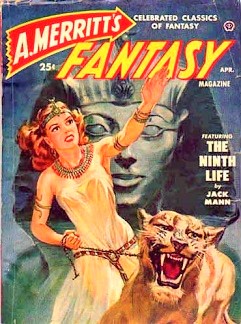 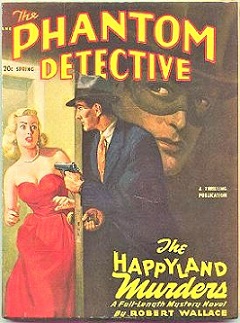 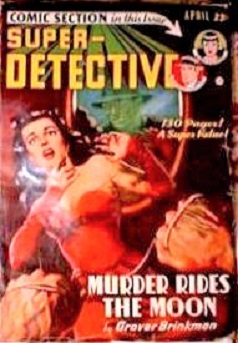