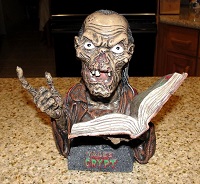 Creeps by Night (Feb. 15, 1944-Aug. 15, 1944) aired “The Strange Burial of Alexander Jordan” on May 23, 1944 as its 14th episode out of only 23. Creeps by Night was a relatively early effort by the young Blue Network (ABC), which had broken away from the much larger and more established National Broadcasting Company (NBC). It was an attempt to grab a market share with stories in the mystery and supernatural thriller vein, and liken itself unto programs like Inner Sanctum, Lights Out!, Dark Fantasy and a few others. It promised some of the biggest names in the business as its actors, and some of the best writers in the field. It tossed out names like Boris Karloff, Peter Lorre, Bela Lugosi, Edmund Gwenn (who stars in this episode, photo at right), and Basil Rathbone; indeed, Karloff signed on to, and was the headliner, for the first twelve episodes. But then Karloff disappeared and it is thought that his busy Broadway Stage and Hollywood schedule prompted his departure, though no definitive reason is known. He was replaced by an unnamed “Doctor X, Master of Mystery” as host for the remaining eleven episodes, and while not Karloff the series didn’t seem to suffer appreciably, and some fine episodes were produced. While Creeps by Night was hyped and promoted prior to its debut, it is speculated that the young Blue Network’s growing pains led to substantial organizational problems that led to spotty promotion of individual shows and their famous headliner stars. And the well known writers were never mentioned, and to this day historians do not know who wrote the shows for they never appeared in the credits. So while Creeps by Night had its administrative and promotional problems and lasted a brief six months, it nevertheless produced some fine shows. Unfortunately, of its 23 episodes only 6 or 7 are known to still exist, and “The Strange Burial of Alexander Jordan” is our second from this short-lived show.

“The Strange Burial of Alexander Jordan” deals with a family patriarch, one Alexander Jordan, who, nearing death, makes his family promise to bury him in a specially designed tomb. For you see, Jordan suffers from severe claustrophobia as well as cataleptic seizures which mimic death–and he does not wish to be buried alive, one of his recurring comatose seizures being mistaken for his death. Waking up after a death-like fit only to find himself entombed would surely drive Jordan mad given his claustrophobia (wouldn’t it any of us?), so he entreats one of his family to rig a device whereby he can signal the outside world that he is yet alive should the unthinkable happen. Amidst protests, his wish is granted. What transpires next you might guess–but you would not be entirely correct, for there is a twist or two that make this a chilling episode indeed, and that also plays devilishly on those afflicted with claustrophobia and the pure mindless panic and terror it can invoke. And what could be worse than being buried alive with no hope of escape! 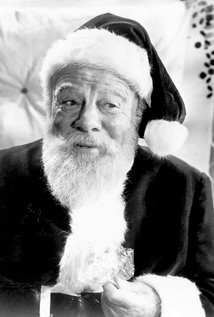 {Though the neighborhood gang was suitably creeped out by what they’d just heard on the radio, the next day their fears were forgotten as they got together and headed for the corner newsstand. Their imaginations afire and a wall of colorful pulp magazines from which to choose staring them in the face, they walked away with the following magazines: Astounding (now Analog) was always a sure pick with its strong track record of storytelling and never-failing monthly schedule. Startling Stories featured one of its usual garish covers guaranteed to catch the eye of a young reader. It fell on hard times in 1944 with only three issues. It debuted in 1939 as a bi-monthly, a schedule to which it would adhere until 1942. 1943 saw a decrease to 5 issues and then the 3 as noted in 1944. By 1947 it had regained its bi-monthly schedule, one it would hold until 1951, then in 1952 it expanded when, for that single year, it produced 12 issues. Alas, from 1953 until its demise in 1955 it produced fewer issues each year, ending as a quarterly. Weird Tales was another stalwart and mostly regular choice with the neighborhood ghouls. “The unique magazine” saw its first issue in 1923 and until its death in 1954 could be counted on to publish some of the most revered names in the dark fantasy, supernatural, and horror fields. Many stories now considered classics and that have been reprinted time and again in countless collections  first saw the light of day in the pages of Weird Tales.}

Speaking of classic stories, the May 1944 issue of Astounding Science Fiction (see cover below) featured one of the most revered and honored stories in the history of the SF field: Clifford D. Simak’s novelette “City,” which would be incorporated with seven other stories* written between 1944-51 to comprise the novel of the same name in 1952. The novel would go on to win the second International Fantasy Award in 1953.

Below: the 1974 Ballantine paperback 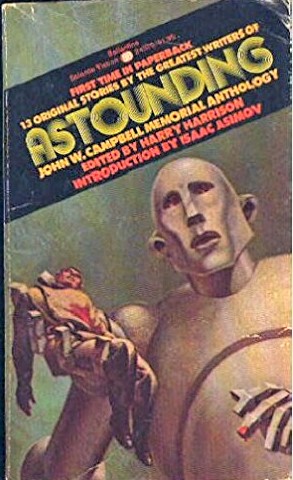 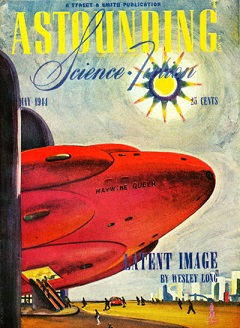 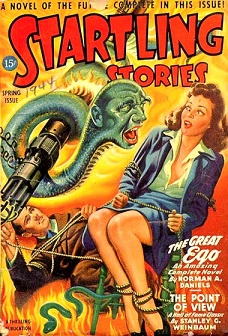 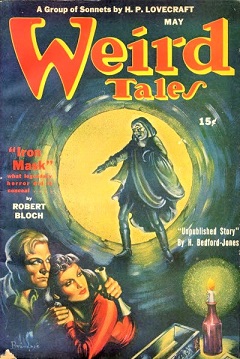