CBS Radio Workshop (1956-57) aired “The Long Way Home” on May 12, 1957. Following the utter devastation of WWIII, there remain no countries, no borders, no governments. Only ragtag groups of  humanity banding together for survival amidst the ruins and savagery. The group we follow here is made up of men and women of several nationalities including Americans, Russians, and Mohammadans.

The somber, low-key ending gives rise to several related questions:  Will mankind always find it necessary to fight, even in the aftermath of an atomic war when all sides no longer even exist as such? Will our violent, warring nature forever and always be part of our innate biological inheritance as the animals, albeit thinking and reasoning animals, we are? Is this ever a good thing under certain circumstances as a survival trait, counter-intuitive as it seems?

Though short-lived and arriving on the stage near the very end of the Golden Age of Radio’s day in the sun, the CBS Radio Workshop was praised for its experimentation and innovation–its willingness to take chances with format, style, and subject matter. This is perhaps best described by the introductory line for each episode, “Dedicated to Man’s imagination–the theater of the mind.”

{After listening to this depressing episode dealing with the aftermath of an atomic war–when the Cold War with the Soviets was front and center on everyone’s minds–youngsters seeking escape and adventure from such real world troubles would turn to their favorite magazines, a few examples of which are shown below.} 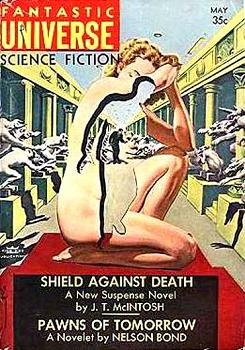 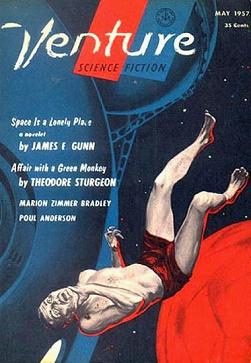 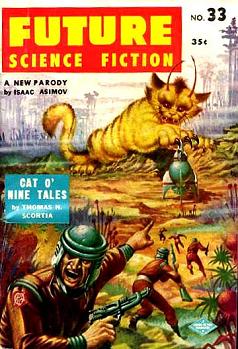 [Under the category of Shhh! Don’t Let Mom Know, one of her (not so) innocent young brood also purchaed the May 1957 issue of The Magazine of Fantasy & Science Fiction at the local drugstore…because the stories looked good. It would soon be passed around the neighborhood until every kid between the ages of 10 and 13 had looked at the knockout…stories. I can imagine cover artist Kelly Freas rather enjoying this assignment, with perhaps a nod to Lucille Ball? Coincidentally, the I Love Lucy show would run on CBS television from 1951-1957, the final show airing on May 6, 1957. Given magazine production times being months ahead of cover dates, it is doubtful that Mr. Freas would have Lucy–at least her head–in mind for this cover. That this specific cover with a general likeness of Lucille Ball should appear the same month her television show was cancelled can only be attributed to random chance. Or can it?] 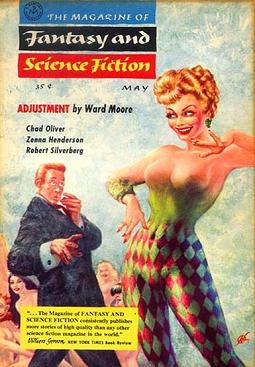