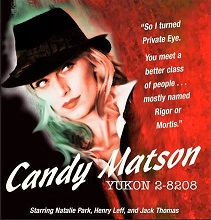 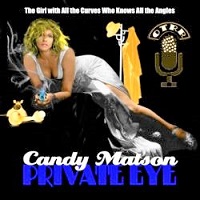 Candy Matson (1949-1951) aired “The Egyptian Amulet” on September 12, 1950 as the 62nd of its estimated 93 shows (some accounts give 92 as the number). With the World Science Fiction Convention taking place this weekend in San Jose, CA and just shouting distance from San Francisco (where Candy Matson lives and operates), I thought I would present an Old Time Radio episode set in San Francisco, one featuring a woman detective, and a smart, self-sufficient one at that. Everyone is familiar with all of the police or detective shows featuring a male detective, sleuth, or investigator (some in the superhero vein). There was The Saint, Sherlock Holmes, Nick Carter, Sam Spade, Philip Marlowe, Nero Wolfe, Jeff Regan (starring Jack Webb), Dragnet (again starring Jack Webb), Johnny Dollar, The Green Hornet, The Shadow, and many, many others. One estimate runs to 120 OTR detective/police shows featuring a male lead. But not only were there Private Eyes on radio, there were Private Eyelashes as well, as early as the late 1930s and well into the 1940s (Kitty Keene, Carolyn Day-Detective, Miss Pinkerton, Meet Miss Sherlock, and Police Woman, to name a few). Though short lived (it never had a sponsor, advertisers were jumping on early television to promote their products), Candy Matson was one of the most popular radio shows west of the Mississipi and especially in San Francisco.

We have showcased but one of the 14 surviving Candy Matson episodes, and that was way back in March of 2017. That show, “The Donna Dunham Case,” was the audition show and was recorded April 4, 1949. With a different show title it would officially air on June 20th of 1949. For those not familiar with that initial episode and its interesting history (a female detective, a veiled gay character, etc.), I am reprising below (with minor alterations) from the original introductory notes: 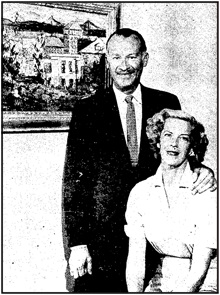 Candy Matson was the brainchild of Monty Masters. Originally conceived as a private investigator program set in San Francisco with a male lead, Masters’ mother-in-law convinced him to feature a female private eye. Masters then turned to his wife Natalie Masters (the former Natalie Park, 1915-1986: photo at left, Monty and Natalie, May 1957) to play the lead role, for which her real life personality was made. Candy Matson lived life to its fullest. A former actress who gave it all up for the life of a private detective, she now resides in a penthouse atop San Francisco’s famed Telegraph Hill. Throughout various episodes we learn that she loves her furs, sunbathing on her patio, listening to 49ers games while sipping martinis, and pretty much her overall luxurious lifestyle. She never compromises in deference to her sexuality, and is a much sought after investigator–as her high-end fees can attest. About her love of cash, Candy quips that it is needed to keep the “moths out of a few mink coats.” Candy had two recurring supporting characters in her adventures, handsome police Lieutenant Ray Mallard (with whom she has more than a professional relationship as the series progresses and his character becomes more suave and alluring with each episode), and her best friend Rembrandt Watson, a single, middle-aged, flamboyant fashion photographer who enjoys the opera. Even though San Francisco had the largest gay community of any American city after World War II, and the show was set in the City by the Bay, network radio in the 40s and 50s would not allow an openly gay character to appear on the air, but Masters’s scripts managed to suggest as much, and the actor who played Watson, Jack Thomas (stage name for Natalie’s real life uncle), added a slightly feminine air to his characterization as time went on. After listening to several of the surviving 14 episodes, it is easy to understand the popularity of Candy Matson. Natalie Masters plays her perfectly: saucy, sexy, smart, hard as nails when need be, and unapologetic and fully embracing her chosen lifestyle. A woman for the ages it would seem and ahead of her time. Natalie Masters would go on to have roles in several films and numerous episodes of popular tv shows, several of which are shown below. 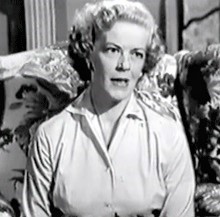 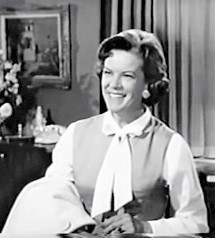 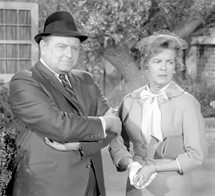 “The Egyptian Amulet” begins with Candy being called to police lieutenant Ray Mallard’s office, where he informs her of an object–the amulet of the title–being found on the body of a female corpse pulled from a lake in Golden Gate Park. After seeking help from an expert to help identify the amulet (did it have any connection to a cult, perhaps?), and a bit of luck when Candy and her photographer friend Rembrandt Watson are house-hunting for him, they get in over their heads with a certain evil Egyptian whose mono-maniacal plans don’t include them. While I found this Evil Bad Guy’s characterization to be stereotypical and corny, the rest of the show works well enough, with a true life-and-death danger threatening Candy and Rembrandt leavened with a bit of humorous dialog between her and semi-love interest lieutenant Mallard (but his attempt to sing is plain awful). So, a good bit of detective work, some real danger, and some humor meld to make this a worthwhile episode, especially if you’ve not run across a Candy Matson episode before. A fair number of Golden Age radio historians and aficionados consider it to be the best (overall) of the numerous female detective/police/private eye shows.

{Though in the mood for more detective fare after listening to this episode of Candy Matson, one of the neighborhood gang still stuck to his SF, and when the gang reached the neighborhood newsstand he went straight for his favorite magazine. Astounding SF (1930-present, now Analog)  featured a cover story by Fritz Leiber for its September 1950 issue and that was more than enough of a selling point for any SF magazine fan. Astounding held to its perennial monthly schedule in 1950. Others of the neighborhood gang went for mayhem, murder, and dark alley detective work and found it in the pulps below. Black Mask Detective (1920-1951, titled just Black Mask until its May 1950 issue) and one of the most revered of all noir detective magazines (Dashiell Hammett’s classic novel The Maltese Falcon first appeared within its pages) was still turning out exciting fiction even in its next to last year of publication. In 1950 it was a bi-monthly. Super-Detective (1940-1950) began in 1934 but ran only 15 issues before folding in 1935. It was revived in 1940 and ran for another 65 issues. It began as a monthly for its first four issues of 1950 (Feb.-May), with the final two cover-dated July and October, the issue below being its last.} 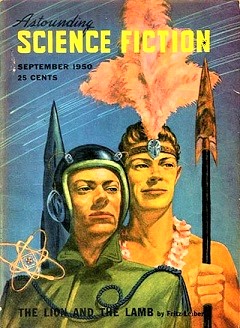 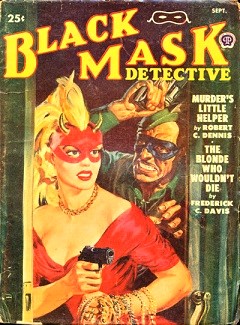 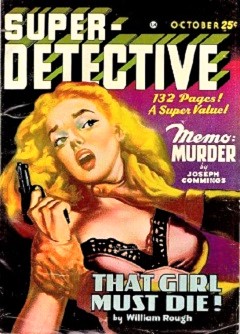