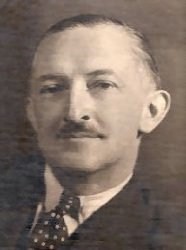 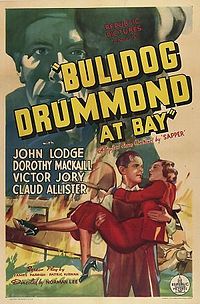 Bulldog Drummond (1941-49) aired “Death Uses Disappearing Ink” on June 9, 1948. This is only the fourth Drummond episode we have run, the first three all coincidentally presented in January of 2015, 2016, and 2017, so it has been well over a year and a half since last we visited him. If you like James Bond you’ll find a lot to like in Hugh “Bulldog” Drummond’s adventures. Bulldog Drummond was the character created by Englishman H. C. McNeile (1888-1937, photo at left), who wrote under the pseudonym of “Sapper,” Sapper being the official term for those serving in the Royal Engineers during World War I, and the name suggested by McNeile’s publisher in order to lend the stories an air of authenticity. None other than Ian Fleming, creator of James Bond, wrote of Bulldog Drummond’s author that he was “Sapper from the waist up and Mickey Spillane below.”

The 1920s and 30s were the heyday of the Drummond novels and films, but American radio would catch up in the 1940s with the Bulldog Drummond radio series, where now Drummond has moved to the United States to continue his adventures, of which “Death Uses Disappearing Ink” is one. While the American radio incarnation of Bulldog Drummond is slightly watered down in terms of the graphic violence appearing in the novels, this episode does involve murders of more than one variety. Captain Drummond and loyal manservant James Denny find themselves on a train with an assassin, undercover police, and a beautiful woman. But as you might suspect, all is not as it seems as Drummond must unravel lies, motives, and the truth in order to save an innocent man from dying–and it’s not easy or pretty.  So sit back and enjoy this tale of deception and misdirection to discover how “Death Uses Disappearing Ink” figures into the plot.

{After listening to this episode of Bulldog Drummond, and because the new kid on the block was a crime/mystery fan with quite a good collection he had impressed his new friends with, the neighborhood gang found themselves at the corner newsstand poring over the latest issues of some of their favorites. Black Mask (1920-51) was the legendary gold standard of crime/detective pulps so was an easy choice. It was a bi-monthly in 1948. Dime Detective (1931-53) looked like a good bet for some down and dirty, page-turning action, and it didn’t hurt that there was a John D. MacDonald cover story to seal the deal. It was a monthly in 1948. Dime Mystery (1932-50) was hard to resist with its eye-catching cover–a scantily clad woman being threatened by a skeletal entity of pure evil–some minion of Satan no doubt if not the Dark One himself, and was a sure draw for fans of the supernatural who were also fans of Weird Tales. Though it published a January issue, Dime Mystery would go bi-monthly with its February issue and finished 1948 with 7 issues.} 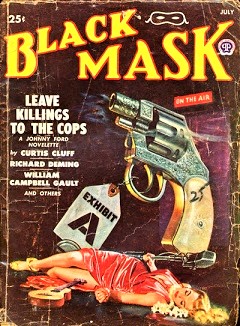 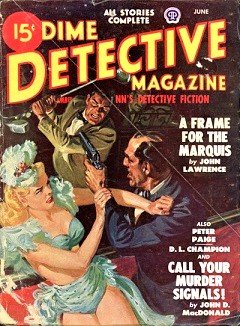 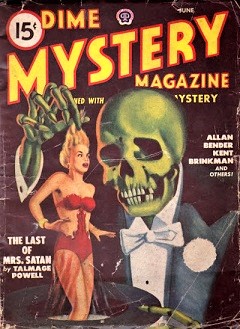