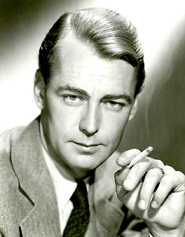 Box 13 (1947-1949) aired “The First Letter” on August 22, 1948 as the 1st of its 52 episodes. This is but the 8th episode of Box 13 we have showcased, and the first since November of 2020. It has proved a popular program, and at the recent request of a fan we present another episode this week, along with a reprise of the introductory material from previous shows for newcomers, or those wishing to refresh their memories.

Box 13 was a production of Mayfair Productions, a company begun by Alan Ladd and Richard Sandville, and was named after a restaurant of the same name owned by the pair. The shows were syndicated to various networks and radio stations who ran them on different days of the week and at different time slots to fit their individual programming needs. Thus, some shows have differing original air dates and are hard to pin down, especially since a limited block of shows (13 or 26 or more episodes of the 52 total run) might have been picked up years later. So we have the show appearing in 1947-48, and/or 1948-49, cropping up again around 1954, and even into the early 1970s. It was well produced, written, and acted, with quite a few Big Name radio actors appearing in various episodes. It is also one of those shows veering away from the single-track, hard-boiled, noirish detective or P.I. radio shows so popular throughout the 1940s in film and on radio, in that while it kept the noirish element (usually at least one corpse a trademark feature) it also emphasized a strong element of adventure, so that Box 13 is probably best categorized as a noir-adventure series. “The First Letter” is the story of Dan Holiday’s first reply to his Box 13 ad after hearing nothing for many months. He learns several important lessons however, and that going anywhere for adventure may not be all that it’s cracked up to be. Sucker? The perfect innocent patsy for murder? See how Holiday squirms out of the straitjacket of planted evidence he finds himself in–and yes, it involves a woman.

{This episode aired on a Sunday evening, so first thing after school the next day the neighborhood gang found themselves at the corner newsstand. They were split between more detective fare as in “The First Letter,” and their usual science fiction pulps, but came out ahead either way this month. Dime Detective (1931-53) offered one of Carroll John Daly’s popular Race Williams stories along with one of John D. MacDonald’s eagerly sought tales. It was a monthly in 1948. Dime Mystery (1932-50) cover featured a new story by one Arthur Leo Zagat, a name familiar to many early pulp SF readers, who, like many another pulp writer, wrote in more than one genre. For many in the business, and to make ends meet at the low pulp payment rate per word, it was necessary to hit as many markets as possible. Dime Mystery flirted with a monthly schedule for a few months at the end of the preceding year then opted for a bi-monthly schedule after its January 1948 issue, ending with 7 issues in 1948. Startling Stories (1939-55) was one of the much beloved SF pulps promoting colorful adventure fare, with only a wink and a nod to accurate science, and the readers couldn’t have cared less. Page-turning thrills were the order of the day and it proved a successful formula. Startling was a bi-monthly in 1948.} 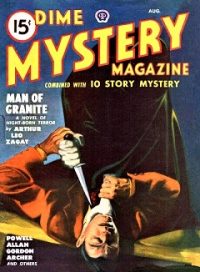 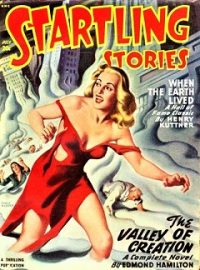