Box 13 (1947-48) aired “Three to Die” on March 19, 1948 as the 23rd of its 52 episodes. Box 13 was a production of Mayfair Productions, a company begun by Alan Ladd and Richard Sandville, and was named after a restaurant of the same name owned by the pair. The shows were syndicated to various networks and radio stations who ran them on different days of the week and at different time slots to fit their individual programming. Thus, some shows have differing original air dates and are hard to pin down, especially since a limited block of shows (13 or 26 episodes or more of the 52 total run) might have been picked up years later. So we have the show appearing in 1947-48, or 1948-49, cropping up again around 1954, and even into the early 1970s. It was well produced, written, and acted, with quite a few Big Name radio actors appearing in various episodes. It is also one of those shows veering away from the single-track, hard-boiled, noirish detective or P.I. radio shows so popular throughout the 1940s in film and on radio, in that while it kept the noirish element (at least one corpse a trademark feature) it also emphasized a strong element of adventure, so that Box 13 is probably best categorized as a noir-adventure series.

The premise of the show has film star Alan Ladd (most recognizable as the hero in the classic 1953 film Shane, photo at left) as writer/adventurer Dan Holiday. Holiday has retired from his days of writing for a newspaper to write his own fiction, and now to gain ideas for his books has placed an ad in the paper that reads:  “Adventure wanted – will go anywhere, do anything – Box 13.” Holiday’s personal secretary, Suzy (played by Sylvia Picker, photo at right with Ladd), is in charge of his mail drop, which Holiday checks regularly. While Suzy’s character is somewhat ditzy (a not uncommon character in film and radio of the time), she is also quite efficient and adds a nice touch to the show.

“Three to Die” has Holiday contacting a man who has answered his ad, and as is usual in these shows, he is in for more adventure than he had in mind due to the respondents not divulging the entirety of their situations. This adventure finds Holiday involved in the nefarious shenanigans behind the construction of a tunnel under a major river where two workers have already died. We learn a little about the science behind such dangerous work–what will cause the tunnel to collapse and what keeps them from doing so, interesting stuff–and how and why the workers have come to their untinely deaths. It’s far more than Holiday bargained for and he comes close to fulfilling the prophecy that there must be “Three to Die.” Writers, how far would you go, to what lengths and hardships to gain real-world experience for ideas for your stories? Claustrophobes beware.

{Swayed by listening to this Box 13 episode, with a man looking for adventure and danger, it is no wonder that some of the impressionable neighborhood ruffians chose outside their comfort zone of SF, F, or Horror pulp magazines for a different kind of thrill. Black Mask (1920-51) promised dark danger, usually with a detective or PI getting drawn into a complex story surrounding a murder of some kind. A monthly until 1942, in 1943 it went bi-monthly and would keep to that schedule until its demise. Doc Savage–Science Detective (1933-49) was always good for fast-paced adventure, often in exotic locales, and featured Doc using his intellect and scientific prowess as much as his brawn, not to mention his faithful, intrepid crew. It should be noted that until Doc Savage‘s Sept./Oct. 1947 issue the title read simply as Doc Savage. From the Sept./Oct. 1947 issue through the Sept./Oct. 1948 issue–a mere 7 issues–the “Science Detective” was added to the title and then summarily dropped, reverting to the original title for its final three issues in 1949. From 1933 through 1946 it was a monthly, but by 1947 had begun to peter out and in 1948 would publish only 5 issues. Thrilling Wonder Stories (1936-55) continued to excite young pulp readers with its wild, colorful tales set in the future or on other planets and was a favored choice. In 1948 it was a bi-monthly.} 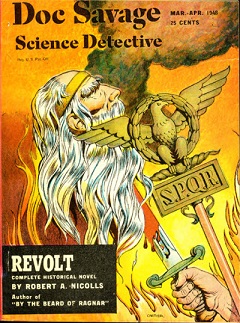 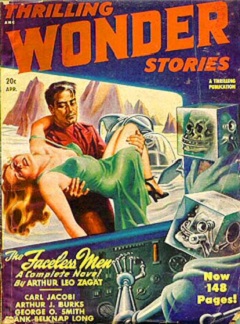