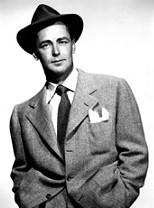 Box 13 (1947-1949) aired “House of Darkness” on July 3, 1949 as the 46th of its 52 episodes. Box 13 was a production of Mayfair Productions, a company begun by Alan Ladd and Richard Sandville, and was named after a restaurant of the same name owned by the pair. The shows were syndicated to various networks and radio stations who ran them on different days of the week and at different time slots to fit their individual programming needs. Thus, some shows have differing original air dates and are hard to pin down, especially since a limited block of shows (13 or 26 or more episodes of the 52 total run) might have been picked up years later. So we have the show appearing in 1947-48, and/or 1948-49, cropping up again around 1954, and even into the early 1970s. It was well produced, written, and acted, with quite a few Big Name radio actors appearing in various episodes. It is also one of those shows veering away from the single-track, hard-boiled, noirish detective or P.I. radio shows so popular throughout the 1940s in film and on radio, in that while it kept the noirish element (usually at least one corpse a trademark feature) it also emphasized a strong element of adventure, so that Box 13 is probably best categorized as a noir-adventure series.

This is but the fifth episode of Box 13 we have showcased, the most recent episode having been posted this past July and it being the only other one this year. “House of Darkness” is an interesting addition to the program’s other more “traditional” stories in that it brings to center stage not only our hero, Dan Holiday, but a disabled man and woman, both of whom contribute to, and figure prominently in the story, their actions an integral part of the solution to the nefarious goings on by evil people hoping to take advantage of the woman’s disability for their own gain.

{The day before July the 4th, 1949 found the neighborhood gang at the corner newsstand, primed and ready for the coming night of fireworks displays and many packs of Black Cat firecrackers thrown at everyone and everything during the day, with hopefully minmal burns on fingers and hands. But that would be tomorrow; now the newsstand beckoned with many thrills of another kind to be had. Black Mask (1920-57) was in many ways the gold standard of detectve/crime magazines, publishing many of the iconic authors of the time and their now classic stories. It was a bi-monthly in 1949. Famous Fantastic Mysteries (1939-53) specialized in reprints of classic SF and Fantasy stories and was a hit with readers. In the issue below, M. P. Shiel’s 1901 classic “last man” novel The Purple Cloud was rewarded as the cover story and main attraction. The novel was later made into the 1959 American film The World, The Flesh and the Devil. H. G. Wells called the novel “brilliant,” and H. P. Lovecraft remarked that it was “delivered with a skill and artistry falling little short of actual majesty.” Famous Fantastic Mysteries was also a bi-monthly in 1949. Thrilling Detective (1931-53) was one of a handful of long-running crime/detective magazines of the hard-boiled variety that had managed to maintain a steady readership from that genre’s heyday in the 1930s. Along with the others here, it was a bi-monthly in 1949.] 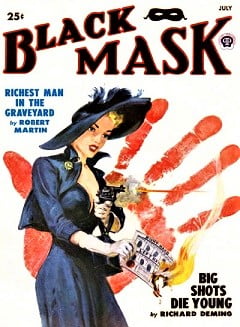 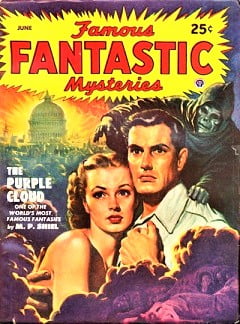 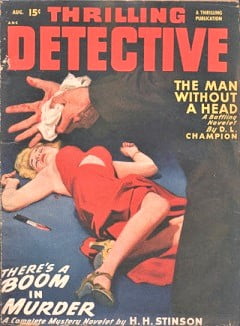