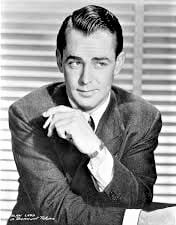 Box 13 (1947-1949) aired “Dan and the Wonderful Lamp” on March 27, 1949 as the 32nd of its 52 episodes. Box 13 was a production of Mayfair Productions, a company begun by Alan Ladd and Richard Sandville, and was named after a restaurant of the same name owned by the pair. The shows were syndicated to various networks and radio stations who ran them on different days of the week and at different time slots to fit their individual programming needs. Thus, some shows have differing original air dates and are hard to pin down, especially since a limited block of shows (13 or 26 or more episodes of the 52 total run) might have been picked up years later. So we have the show appearing in 1947-48, and/or 1948-49, cropping up again around 1954, and even into the early 1970s. It was well produced, written, and acted, with quite a few Big Name radio actors appearing in various episodes. It is also one of those shows veering away from the single-track, hard-boiled, noirish detective or P.I. radio shows so popular throughout the 1940s in film and on radio, in that while it kept the noirish element (usually at least one corpse a trademark feature) it also emphasized a strong element of adventure, so that Box 13 is probably best categorized as a noir-adventure series. 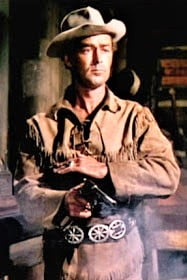 The premise of the show has film star Alan Ladd (1913-1964, most recognizable as the hero in the classic 1953 film Shane) as writer/adventurer Dan Holiday. Holiday has retired from his days of writing for a newspaper to write his own fiction, and now to gain ideas for his books has placed an ad in the paper that reads:  “Adventure wanted – will go anywhere, do anything – Box 13.” Holiday’s personal secretary, Suzy (played by Sylvia Picker, photo at right with Ladd), is in charge of his mail drop, which Holiday checks regularly. While Suzy’s character is somewhat ditzy (a not uncommon character in film and radio of the time), she plays it to the hilt and adds a nice touch to the show.

This is but the sixth episode of Box 13 we have showcased, the most recent having been posted in October of 2019 as only the second since 2018. In this episode, Dan Holiday finds adventure and trouble in the strangest of places, at an innocuous charity bazaar of all places, where he comes by a lamp that he finds out soon enough is more than it appears. To discover what hidden property renders the lamp so valuable–and so dangerous–listen now to the curious story of “Dan and the Wonderful Lamp.”

{The 1949 NCAA Basketball Tournament ended the day before this episode of Box 13 aired. The tournament began in 1939 and for its first 12 years invited only 8 teams to participate. The 1949 tournament ran from March 18 through March 26, with Kentucky defeating Oklahoma A&M 46-36. What would come to be known as March Madness now fading from their thoughts, the neighborhood gang turned once again to their own form of madness–their love of pulp magazines. Having bought all of their SF pulps for March and with this episode of Box 13 fresh in their minds, they turned to some of their favorite detective pulps as a perfectly good reason to get rid of the spare nickels and dimes burning holes in their pockets. Crack Detective Stories (1938-57), while long-lived, went through no fewer than eight title changes in its 19-year run, with its current title lasting from November of 1943 through September of 1949. It was a bi-monthly in 1949. Dime Detective (1931-53) was a reliable purveyor of the kind of story that kept its readers coming back for more, especially when it could showcase popular authors like John D. MacDonald on its covers. It was a monthly in 1949. Thrilling Detective (1931-53), a worthwhile rival to many of its pulp detective brethren, was a monthly publication until just after WWII. It went to a bi-monthly schedule with its November 1945 issue, a schedule it would keep until 1952, the year before it would finally fold. Nevertheless, the magazine managed a remarkable 213 issues in its 22-year run.} 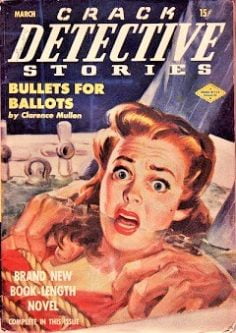 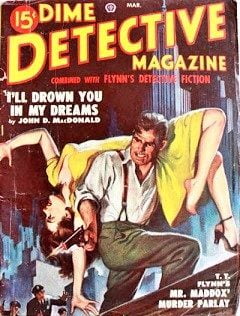 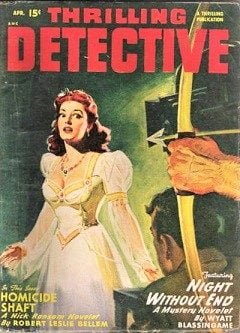