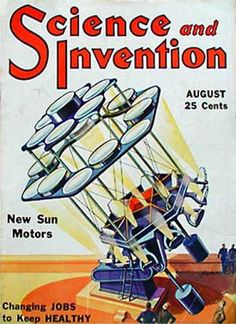 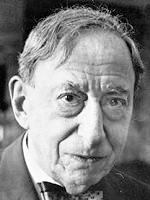 Adventures in Research (1943-55) aired “The History of the 1st Regular Radio Broadcast” on November 11, 1944 as its 95th episode, and “The Story of Metal X” on September 10, 1946 as its 190th episode. Though the show changed its format somewhere in early 1945 from a question and answer program between the hosts, to a purely dramatic linear recreation of historical events format thereafter, taken together the show aired approximately 630 episodes and can be viewed as the radio equivalent of the Discovery Channel and other such television information programs today.

Adventures in Research was sponsored by Westinghouse Electric and aired over radio station KDKA located in Pittsburgh, PA (also the home of Westingouse Electric, the world’s leading supplier of innovative nuclear technology). The hosts were Dr. Phillips Thomas and Paul Shannon. Phillips held a PhD in physics and wrote each 15-minute weekly show, endeavoring to make them as historically accurate as possible. The purpose of the program was to enlighten and educate in interesting fashion scientific and technological landmarks for a lay audience, and from its 12-year run it obviously was quite popular. Show topics ranged widely, including but not limited to:  future power sources, the invention of the typewriter, electronics to communications, the first American patent, science in recreation, time through the ages, stones that gave light, the missing planets, the modest bookbinder, healing with light, the visual telegraph, yesterday’s secret weapons, America’s first invention, the first skyscraper, the perpetual discovery, and many, many more. They fired the imaginations of young and old alike, inspiring many a youth to embark on a career in various scientific and engineering fields, much as did magazines like Science and Invention (cover top left from the August 1931 issue), published by the Father of Science Fiction Hugo Gernsback (1884-1967, photo top right).

The first of the two episodes below is one of the last of the question and answer programs before the format change. It recreates the very first regularly scheduled radio broadcast, that being the live account of the 1920 Presidential election results from November 2, 1920, where the Republican ticket of Warren G. Harding for President (photo at left) and VP running mate Calvin Coolidge faced off against the Democrat ticket of James M. Cox for President (photo at right) and VP running mate Franklin D. Roosevelt. Of course, Harding won that election, but there were third parties back then as well, most notably the candidate running on the socialist-labor party, one Eugene V. Debbs, the man responsible for organizing the union movement in the United States. When the radio broadcast begins relaying preliminary election night results received from various parts of the country via telephone, one such report comes in from Topeka, KS. While Harding was leading Cox early on with nearly one thousand votes cast, Debbs had but one lone vote. There are other interesting historical tidbits recounted along the way, and it makes for a fascinating recreation as we arre reminded of “The History of the 1st Regular Radio Broadcast.” It aired on November 11, 1944, shortly following that year’s Presidential election (won by the persistent Democrat FDR with Harry Truman as VP running mate). 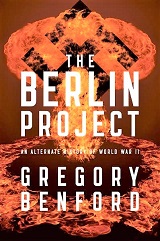 “The Story of Metal X” by this time–September of 1946–was one of the episodes well into the revamped format of the more straightforward relatively unbroken single story format. It drew my attention because of the enigmatic and slightly SF-flavored title. Just what Metal X is, is given away rather early so I don’t feel too badly about the forthcoming spoiler. Metal X is uranium. But did you know that well before it was eventually harnessed for use in the atomic bomb that it was a candidate for the possible filament used in lightbulbs? While tungsten was eventually settled on for its unique properties (high melting point), the initial research into uranium led to early knowledge that was later turned toward its eventual purpose. But there was a minor surprise near the end (around the 13-minute mark) that gives this a definite SF tie-in, and to a just-released (May 2017) SF alternate history novel. While wrapping up the episode a brief mention is made that there were two methods of reducing and separating uranium for use in making the atomic bomb. This doesn’t sound too important or earth-shattering, and is passed off in a few words of narration, but nevertheless is something only a relatively few people are aware of even today. But this tossed off line is at the very core of Gregory Benford’s new novel The Berlin Project. Benford takes the  method of uranium separation suggested by physical chemist Harold Urey (Nobel Prize in Chemistry, 1934), and promoted by his assistant, chemical and mathematical physicist Karl P. Cohen (which method the government chose not to use and which would have, in all likelihood, shortened WW II by a year, and was later acknowledged by none other than Edward Teller as the way the Manhattan Project should have gone), as the jumping off point in Benford’s alternate history. It is a fascinating and meticulously researched book, due in large part to the fact that Benford, himself a physicist, knew a number of the major physicists and scientists involved, including Cohen, whom Benford got to know on a more personal level before his death. Benford married one of Cohen’s daughters, Elisabeth (who has written hard biological SF from time to time under the pen name of Elisabeth Malartre), in 2006, following the passing of his first wife, Joan, in 2002. “And now…” as the late Paul Harvey used to say, “…you know the rest of the story.”

{After listening to “The Story of Metal X” the future scientists of the neighborhood couldn’t wait to gather at the end of the block and head for the nearby newsstand to enhance their burgeoning love of science with that of science fiction. As always, Astounding SF (1930-present, now Analog) was a perennial favorite and throughout 1946 maintained its monthly publication schedule. A new Ray Bradbury story in the Fall 1946 issue of Planet Stories (1939-55) was hard to resist (as was the cool cover). It was a quarterly in 1946. The Fall 1946 issue ofStartling Stories (also 1939-55) was one the gang hadn’t picked up yet, so it was an easy sale, though it would turn out to be the final issue and the last of 5 the magazine offered in 1946. This issue also had a Captain Future story by Manly Wade Wellman (of all people) advertised on the cover, which was a rare event, as Edmond Hamilton was known as the Captain Future writer (Hamilton would pen all but 3 of the 27 combined novels and stories from 1940-51 and which appeared in either Captain Future magazine or Startling Stories). “The Solar Invasion” would be Wellman’s only Captain Future story.} 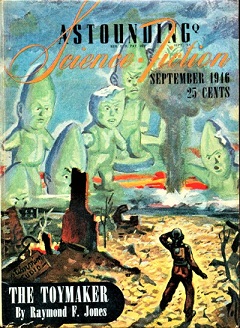 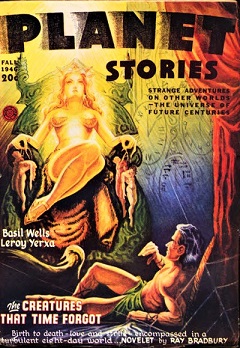 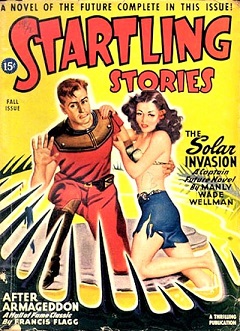