2000 Plus (1950-52) aired “When the Machines Went Mad” on April 26, 1950. Borrowing introductory notes about the show from a previous episode, and for the benefit of newcomers to the show, 2000 Plus ran from March 15, 1950 through January 2, 1952, and was the first adult SF anthology series on radio (as opposed to serials, most of which were juvenile–Buck Rogers and Tom Corbett for instance), beating out Dimension X by less than a month. For those trying to keep a chronology of the important adult SF series’ straight, here’s a breakdown:

“When the Machines Went Mad” deals with a familiar theme known well to SF fans–that of machines (in this case robots) taking over civilization and supplanting mankind, making them literal slaves to the machine. In this case, however, we learn that the goal is not to make humankind slaves but to destroy it entirely. It’s interesting to note that this episode from early 1950 (that’s 67 years ago as I type) speaks of self-replicating robots (i.e. smart robots that can make new robots without the aid of humans, thus rendering us useless to the machines), a theme which has been treated quite often in various ways in decades since, and much more seriously and in depth the past 20-30 years. Also fascinating is that certain robots, as you will soon hear, are known as the “mind police,” I kid you not. Loaded with other center-core SF terms like jet cars and blasters as well as a group of those revolting against the machines, “When the Machines Went Mad” is a dandy effort to warn us of one possible future if we lose control of our machines–especially if they become self-aware and self-replicating–the possibility about which we hear more and more every day.

{The neighborhood SF fanatics, having already purchased all of the monthly SF magazines they could get their hands on, headed for the corner newsstand on a weekend in April of 1950 in search of the newest quarterlies and bi-monthlies. The Magazine of Fantasy and Science Fiction (1949-present) proudly showcased its second issue (adding and Science Fiction to its title). Eager young minds sought anything new or different, so this issue of F&SF was eagerly picked up. Planet Stories (1939-55) was quarterly at this point and with its usual dynamic cover (dynamic in this sense meaning portraying action or movement of some sort, as opposed to a static cover perhaps showing a landscape) and a story by Ray Bradbury was enough to secure a sale. And the venerable Weird Tales (1923-54, its first of several incarnations) was also a regular favorite. It was a bi-monthly in 1950 and with proven names like Seabury Quinn and Robert Bloch on the cover it was an easy choice.} 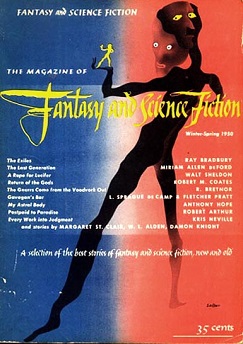 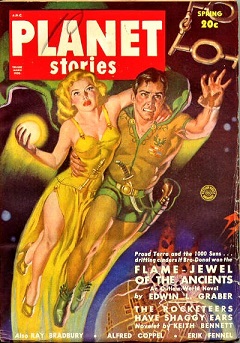 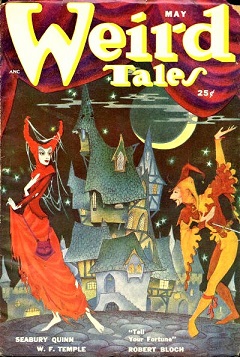