2000 Plus (1950-52) aired “The Giant Walks” on November 8, 1950. Borrowing introductory notes about the show from a previous episode, and for the benefit of newcomers to the show, 2000 Plus ran from March 15, 1950 through January 2, 1952, and was the first adult SF anthology series on radio (as opposed to serials, most of which were juvenile–Buck Rogers and Tom Corbett for instance), beating out Dimension X by less than a month. For those trying to keep a chronology of the important adult SF series’ straight, here’s a breakdown:

This episode fits squarely in the mad scientist mold, and is a prime example of the sub-genre so prevalent in early magazine, radio, and film SF. It’s also a lot of fun, though not quite what one might expect if you stick around to the very end. In short, a scientist working in a secret laboratory decides to perform an illegal experiment on his own time to enlarge animals with his invented “pituitary revitalizer.” The next step, of course, is to try it on a human subject, but he first must convince the subject that the result is for the altruistic, eventual benefit of all humanity. When our subject is told otherwise by a third party, he doesn’t want to believe he is being used for ill intent by the scientist as the first in a projected race to take over Earth, and so escapes to find the truth for himself, alarming the outer world by his very existence. Not knowing who or what he is–or where he might come from (outer space?) the military gets involved, with their manned rockets ordered to kill the giant menace as it strides across the countrside. Which they almost do until a reprieve halts them and saves our human subject at the last moment. But why, and how, we are given to wonder? What has happened to back the military off, and what happens to the evil scientist and our human guinea pig? It’s an answer rather out of left field, but given the nature of the plot in the first place we can easily suspend our disbelief at this oddball twist ending that actually works, and is a welcome detour from what we have come to expect from this type of cautionary tale, as we discover the reason why “The Giant Walks.”

{After listening raptly to the wild imaginings in this episode of 2000 Plus, a trip to the corner newsstand for the neighborhood gang was a foregone conclusion. fantastic Adventures (1939-53) was just what the doctor ordered with its colorful blend of science fantasy and romance. It was a monthly in 1950. Imagination (1950-58) was one of publisher Raymond Palmer’s magazine ventures, the issue below being its second. Palmer sold the magazine promptly after this issue and it would enjoy a decent run as a bi-monthly for another eight years. Thrilling Wonder Stories (1936-55) was still going strong in 1950 and would feature many a now classic or much beloved tale of planetary adventure or super science during its almot two-decade run. In 1950 it was also a bi-monthly.} 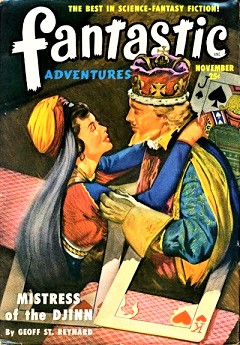 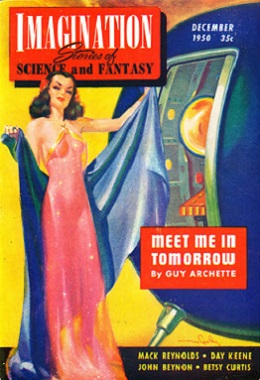 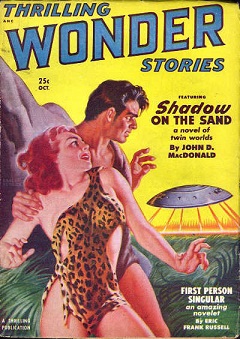