As the title indicates, this is the story of a soldier returning home from war. Taking place in the future, this particular warrior has spent 11 weeks locked in a ship with his brethren on their way to fight the Martian War. Following his years of battle he has again spent the last 11 weeks on the cloistered trip home. He was one of the lucky ones; he survived. He is experiencing major difficulties in readjusting to life back home now, to his loving wife and the very young son he knew only as a babe. His little boy has been filled with war stories of fame and glory and eventually desires to be like the father he adores. Against his better judgment, our soldier/father relents and tells his impressionable son how fighting in a war is really like–at which point and through the father’s eyes the drama takes us to Mars and the harsh reality of waging war there. Deadly spiders whose venom can kill in moments, the slime, the ungodly climate, the crafty little Martians…the death of comrades. It is a tale both poignant and riveting, and ever so timeless, for set against an SF background we know that what we have here, this tale of a soldier coming home from war, could take place at any time and anywhere, as it has and ever will. Those who have served in any branch of the military and have experienced what this story describes will understand its relevance. It is a story not just for them but all of us. Listen now to “A Veteran Comes Home,” one of the very best SF war stories from the Golden Age of Old Time Radio.

[Historical note: While this episode of 2000 Plus was designed to focus attention on veterans–soldiers who had returned from war–and was purposely aired on the day after Independence Day in 1950, one can’t help but note the irony that only 15 days before, on June 25th, North Korea had invaded South Korea and the United States would soon be sending its soldiers off to fight yet again.]

{The neighborhood urchins were full of piss and vinegar the summer of 1950 as they played games, rolled in the dirt and mud, chose teams for afternoon baseball games, and otherwise enjoyed their youth to the fullest. One of their favorite, more passive yet no less thrilling pasttimes was herding themselves to the corner newsstand or drugstore, there to pore over the latest pulp magazines with their garish covers and teased promises of monsters, heroines or worlds to be saved, and thrilling adventures on strange worlds. Among their many choices in July of 1950 were the issues shown below. Note the much-reprinted Fritz Leiber cover story for the July issue of fantastic Adventures.} 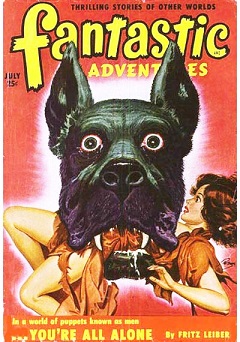 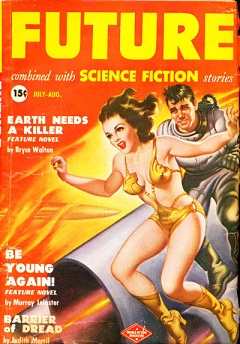 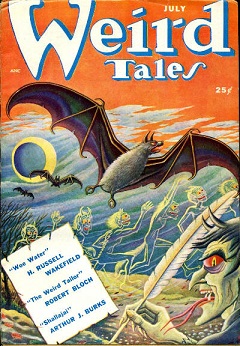