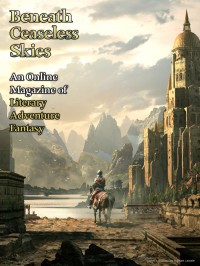 “One Ear Back” by Tina Connolly

In “One Ear Back” by Tina Connolly a curse laid upon her mother destined the child to grow up, not as a human, but as a cat.  The girl learned cat skills and was a companion to her human friend Ingy while she waited for the day when her mother would perform the good deed that would return her to human form.  But when Ingy decided to search out the giant that laid the curse, the cat’s mother was forced to race in to save them.  It cost the mother her life, but didn’t return her to human.  Nor did it help her daughter.  The daughter roamed, doing good deeds, but didn’t change.  And then she heard that Ingy was in danger.

This story has an interesting premise, but it meanders, and introduces characters that seem to have no real role.  Even the action seems oddly blunted.  It didn’t make the emotional connections for me.

“Death and the Thunderbird” by Michael J. DeLuca is presented in two parts, and will be reviewed in its entirety in the review of Beneath Ceaseless Skies #98 for June 28th.