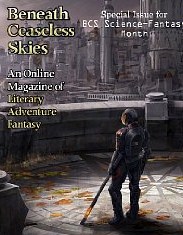 “The Mote-Dancer and the Firelife” by Chris Willrich is a wildly-textured fantasy featuring aliens, oodles of legacy technology, and an afterlife (the ‘Firelife’).

Our narrator, I-Chen, is a Mote-Dancer trying to forget her dead lover, Nicolai, and not having much success, as he lives on in her split consciousness as something very like an autonomous being. Nicolai died in a duel with a Spine Flutist, a warrior class of repellent aliens who go into battle as bifurcated pairs: a ‘Quixote,’ who does the actual fighting, and their ‘Sancho,’ who hangs back, playing weird trilling music as accompaniment or perhaps encouragement. So when the Spiny, Omz, offers the opportunity for Nicolai to meet his killer, Omz’s Quixote, Mnat and pass into the Firelife, I-Chen seizes the opportunity.

A highly imaginative and overall solid story which I felt was slightly marred by the author’s choice of a wisecracking narrative voice, an affectation that seems on the rise in contemporary SF and which in most cases undermines rather than reinforces the material; that said, the argument could be made that it’s this very levity, the hint of tongue-in-cheek goofiness, that makes the vast amount of worldbuilding detail palatable (contrast with my comments on “The Book of Locked Doors,” below). In conclusion, a good piece, clever and well worth reading.

Anne Ivy, we are told in the notes appended to “Scry,” is the pen name for twin sisters who write collaboratively. Whatever the process, the result speaks for itself. “Scry” is a smooth, powerful piece of fiction that unfolds smoothly without a single misstep.

Eyre Isri Esthe is a scryer, the greatest of her generation. Hideously disfigured by a scrying accident (acids and fire being the best medium for scrying in her world, better than water and silver, or blood and wood), Esthe is abandoned by her husband Lun when he flees, along with family and retainers, from the alien conqueror Karnon Nameless Dae.

Foremost on Karnon Dae’s agenda is to rid the world of its caste system, under which aristos like Esthe and Lun have lived a life of ease and privilege. And though Karnon is pledged to kill her—and he can not lie—Esthe, who wants revenge on Lun, barters her services for a deferment of her death. But fear and doubt are always present, and the temptation for Esthe to scry her own death is ever strong. Only this is the most dangerous thing a scryer can attempt, because a thing once scryed will come to pass…

Nuanced characters with complex motivations and layered goals work to make “Scry” a strong, thoughtful story that runs the range of human emotion and examines the eternal dichotomy between destiny and free will. This is the best fantasy piece I’ve read in a long while, and one which should see some award nominations. Not to be missed.

Yoon Ha Lee’s “The Book of Locked Doors” is beautifully written, its worldbuilding rich to the point of being sumptuous. Unfortunately, this last may be the very quality that made the story something of a turn-off for me. To clarify: as a lifelong science fiction and fantasy reader, I enjoy strangeness as much as anyone else; but there comes a point when the sheer tidal wave of bling in a story becomes such that I either start feeling as though I’m working too hard, or that the story is much ado about nothing, that its import and weight doesn’t justify the trouble … and I tune out, as the sprawling and digressive detail of the world fatally detracts from the arrow of story.

To the story, then: Vayag’s homeland of Territory 5 has been conquered by the Meroi. As an undercover agent, Vayag has been tasked with cutting off comms to the Cloud Fortress, a Meroi stronghold floating above the capital city, so that others can carry out a sabotage mission.

The Book Vayag carries, written and possessed by her dead sister’s spirit, wants her to bring down the fortress regardless of collateral damage and innocent deaths, but Vayag, who won’t be a party to massacre, tries to do things her own way.

I found this one both tedious and forgettable; other readers will likely feel differently, finding virtue in the very aspects with which I find fault. Personal tastes.

“Juggernaut” by Megan Arkenberg is the story of Casimar Altan. After surviving an attack at the age of 13 by the Tourkis Dragons that kills her entire family, Casimar, by sheer boldness and intelligence, has become rich enough to buy a planet, Juggernaut. When the narrator, Levent, must escape Akshayavat, one of the inner system planets, Casimar offers to help him, sending him to Juggernaut if Levent will agree to attempt to persuade Juggernaut’s governor, Hazan Kudret, to abandon his resistance against Altan.

A byzantine plot with good bones and potential marred by the author’s choice of narrative strategy. Lengthy flashbacks and retold conversations slow and interrupt the action, so that the story events seem remote and third-hand. This could have been so much better.