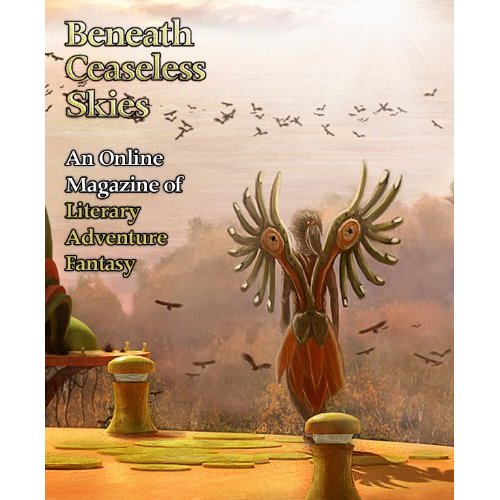 Margaret Ronald’s “Letters of Fire” begins with Marten, an alchemage’s apprentice, at his master’s grave. Marten is found by an enemy soldier of the Bull’s camp, which was responsible for his master’s death; although the Bull has ordered that all alchemages are to be executed, Marten is spared and brought to the camp as a recruit. He accepts and bides his time for later escape.

At the camp, Marten is accepted and treated kindly, a far cry from the constant abuse from his master that conditioned him to fear and mistrust. He slowly begins to see that the enemy is not the monster he believed, and he is fascinated to discover that the robot machines used by the Bull’s camp are powered by the same raw material as found in the alchemage’s elixir—the difference being that alchemages, after ingesting the elixir, use their minds to blow things up or to fly, and Bull’s soldiers use inanimate controls to move the robots or to shoot guns. We see how Marten’s point of view is gradually expanded, how he finds his own humanity in seeing the humanity of those he thought to be his enemy. Of course, in the climax of the story we see Marten torn between his two lives and having to make choices with fatal repercussions on either end.

Marten is one of those characters with whom we identify but don’t really want to. He believes he’s a failure because his master always told him how bad he was at everything, and he acts accordingly. He cowers, winces, and doesn’t make eye contact, and even when his actions save the day they could be perceived as blunders. That said, he and the rest of the characters all have dimension and flaws, distinguishing this story from the stereotypical heroic journeys and good/evil polarizations of the genre. This story also offers some interesting themes and moral questions. Among them—is it more important to make a name for oneself, or simply to do good work? And, is it okay to kill off a bunch of people who have the potential to abuse their personal power?

I thought Ronald’s writing was superb, both in terms of storyline and in the liquid loveliness of her prose. I can’t quite buy the science fiction aspect of the story that an ore distilled and consumed by a person could give him similar powers to a robot fueled by the same ore, but within Ronald’s cosmology all is consistent and impressively expert-sounding.

Ronald has written several other stories that take place in the same world as this one. I think it is a world well worth visiting.

Wendy N. Wagner’s “Cold Iron and Green Vines” is a beautifully written coming-of-age story that combines an element of folklore—the hinkypunks, ghostly lights seen in bogs or marshes—with an alternate world where people protect themselves from these ghosts with iron anklets, or by exchanging their physical bodies for ones made of wicker and cogs, powered by steam.

The narrator is Miss Yaricka, a 14-year-old orphan whose doubt of her growing “green magic” stops her from saving a man from dancing away to his death with the hinkypunks. Haunted by her own inaction, she begins to understand her power and to embrace a worldview that does not deny the part the hinkypunks play in balancing the magical ecosystem of the bogs and their environs. Miss Yaricka completes a cycle by accepting her new role as the town “green-binder,” which was her mother’s place before she matured her guardianship by transforming into an oak tree.

This story lingers in the mind after the read. I found it in part disturbing (mainly because of the implications of having a body made out of wicker), and in part sad, because it seemed to me that the story isn’t about changing things for the better, but about coming full circle. The story doesn’t have a lot happen in it, and problems with the hinkypunks aren’t resolved. But this is all appropriate, and oddly satisfying, because the themes of nature and balance, mechanical separation and sensual unity are so prevalent—it’s not about making things perfect or having a “happily ever after” closure. And there is hope and the possibility of change in the freshness of Miss Yaricka’s new perspective.