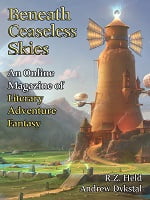 “The Forge” by Andrew Dykstal

Two mermaids are the main characters in “Swimming Apart” by R.Z. Held. Friends since childhood, they have not spent much time together since one had a baby. The other is the more adventurous of the pair, daring to enter human locales in search of treasure. After some disagreement, they decide to explore an abandoned, water-filled mine together. The dangerous journey makes them realize how different they have become.

Despite the hazards of the mine, this is mostly a quiet, intimate character study. A few awkward phrases at the beginning make it difficult for the reader to engage with the story. After this discouraging start, the tale becomes an effective fable about the way that time and circumstances can cause friends to drift apart.

“The Forge” by Andrew Dykstal begins with a warrior and a magician travelling with a lunatic who has murdered their king. They kill the assassin in order to heal his injuries, because he cannot truly die, and regains his health after each death. After this startling opening, flashbacks provide the background to a complex tale of magic, palace intrigue, and the strange people who took away the murderer’s ability to die.

The author shows a great deal of imagination and the ability to seize the reader’s attention. The story is full of supernatural elements, not all of which are relevant. The most striking example is the fact that the magician has several pairs of eyes, wearing different ones from time to time. Although this is an intriguing concept, it adds almost nothing to the plot.