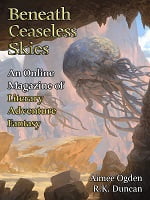 “A Song for the Leadwood Tree” by Aimee Ogden

“The Sweetest Fruit of Summer” by R.K. Duncan

Two stories of women involved in devastating wars, raging through lands that never existed, appear in the latest issue of this bi-weekly publication.

The main character in “A Song for the Leadwood Tree” by Aimee Ogden is a warrior queen. Her realm is under attack by raiders who have brought a terrible plague. After her daughters die from the disease, she adopts a young orphaned boy as her son. Despite the fact that he is of a different ethnic background, he becomes her heir, ready to exchange the crown of war for one of peace.

There is nothing overtly fantastic about the plot, other than the imaginary world in which it takes place. The story is related in multiple flashbacks, not always to its benefit. As an example, the reader quickly learns that the queen has lost her tongue, lessening the impact of the flashback to the battle where it was cut out. The narration is reminiscent of a myth, written in an evocative style. On the whole, the story is more effective as an exercise in mood and character than as a tale of fantasy.

The protagonist of “The Sweetest Fruit of Summer” by R.K. Duncan is a young woman stolen from a prosperous land by a desert king. He feeds her the seeds of a magical fruit, which grant her the power of prophecy. With the aid of her visions, he defeats the attempts of conquered peoples to rebel against his rule. She foresees her own land rising against the tyrant, leading to a climactic battle.

The author writes with vividness and clarity, creating a richly imagined background. The behavior of the main character seems inconsistent, as she is both passive and assertive, and acts in ways that are simultaneously heroic and villainous.

Victoria Silverwolf has never been involved in warfare.