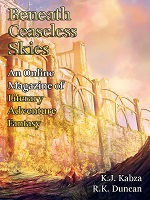 “The Bone Flute Quartet” by K.J. Kabza is a story with the pacing of a tale told round a fire to a group of children. Our narrator, Bretchen, is a youth who wants to be a witch like Myrra Ferrinn, an ancient sorceress who was drawn and quartered for her dark magic. Bretchen’s grandmother, or Ommama, feeds this interest despite her mother’s protestations. After finishing her primary schooling at age eleven, Bretchen is given a choice: go to a knittery and learn that trade or try and apprentice to a witch. When she takes the path of a witch, it’s no surprise.

However, what is surprising is after Bretchen’s trials and tribulations with magic during her adventure, she still chooses to become a witch at the end of the story. Since this read as a child’s tale, I assumed there’d be a lesson of power/corruption, etc., but at the end Bretchen chooses to continue down her previously chosen path, though with open eyes. It’s an interesting choice I’m not entirely sure if I enjoy, but it certainly works.

R.K. Duncan‘s “The Thirty-Eight-Hundred Bone Coat” is a story centered around the idea that severed hands tossed into a river by an ancient tyrant hold mystical properties. Navid’s family takes these ancient hands and molds them into talismans, which they sell to commoners and nobles alike. When a high lord arrives and demands a 3,800 bone coat, Navid, the diver of the family, is in a race against time to find the hands so his family can craft the coat. When he runs out of time, Navid makes a choice to defile a temple in order to increase his chances of gathering the bones they need in time.

The story itself is interesting and engaging, but the ending wrapped up a bit too nicely for my taste. I kept expecting something horrible to happen to Navid after the temple scene, but nothing does. There seems to be no consequence to his action, so I felt let down at the end, like I missed something.

At the very least, he could’ve lost his hands.

Mike Wyant, Jr. is an ex-IT guy, who has finally committed to a writing life out in the Middle of Nowhere, New York.