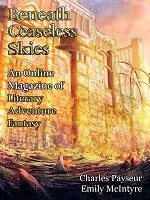 “I Am Destiny” by Emily McIntyre

First in Beneath Ceaseless Skies #274 is “Undercurrents” by Charles Payseur. The premise of this author’s world is that rivers are sentient, with distinct personalities and the ability to transform into humanoid form. The essence of this story is an exploration of humanity’s response to that fact.

The Lutean Empire’s answer is to aggressively expand by enslaving rivers and binding them to their service using a combination of early 20th Century technology reinforced by potent magic. Their most important weapons are humans (Dowsers) trained by deeply unpleasant means to track and hunt down any river that might resist the Empire.

This specific tale is set in a provincial town that was forcibly incorporated into the Empire fifteen years ago. The town’s relationship with their own river had been far more benign and co-operative until the arrival of the Empire, but their new masters impose Lutean rules and methods with scant regard for the beliefs of the conquered. The arrival of Imperial Officials and Dowsers to forcibly test the young of the town for the ability to become Dowsers in the service of the Empire ignites the smouldering resentment and precipitates a violent reaction.

The individual characters are adequately painted, but this is primarily a morality tale. The question of how we should relate to other sentient species is not new in SF or fantasy but the fact that the sentient under discussion is so very different to us adds a certain interesting twist to the story.

The second offering is: “I Am Destiny” by Emily McIntyre. The first person narrator is Jane, a serving girl at the court of a medieval Duke in a rather sanitised world of sword and sorcery. The author has invented a novel scheme of magic in which the various forms of magic are neither created nor consumed when used. Magic can only be created or passed on to new holders by the primal activities of birth and death. Jane was the accidental recipient of the powerful magic of the Duke’s mother when the old Dowager died, but she remains the servant of the ducal family. This leads to the most significant plot-hole in this story. If great magical power can be liberated by death then it is likely that a medieval lord would willingly use his unfettered power of life and death over his lowly and powerless subjects to ensure that such magic is swiftly restored to his family. The ruling family’s genteel behaviour towards Jane is rather too reflective of our own world of law, people’s rights and western liberal sensibilities rather than the autocratic world of a medieval Duchy.

Jane narrates the story of the day when the Duchy is conquered by an ultra-powerful Sorceress, a mysterious woman who wears Jane’s face. The Sorceress grants the Duchy to Jane but requires in exchange a gift that Jane is exceedingly loathe to grant.

This short story may seem at first sight to be a classical “rags to riches” tale but it reads as if it is actually a chapter extracted from a much larger work. Many ends are left unsorted, many mysteries are left unsolved and the richness and effort that have been put into the scheme of magic appears disproportionate to a short story.