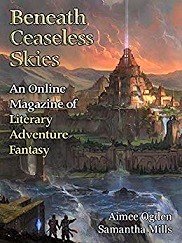 “Adrianna in Pomegranate” by Samantha Mills

This Valentine’s Day when most people are blissfully celebrating their romantic attachments, Beneath Ceaseless Skies #271 brings readers a set of fantasy tales connected by not only love but also loss and death.

Anell Nath has obtained what many scientists from the Hollow Universities seek—patronage from a noble House. Working for Countess Liel, she is expected to find a cure for death or, at the very least, a means of prolonging her benefactor’s life. Anell, however, has other ideas about how to obtain immortality and gives only cursory attention to the desires of the Countess, preferring instead to work on finding a way to create a truly immortal child.

From the beginning, it is quite clear that Ogden does a fine job at worldbuilding. The cultural rituals and details, including their fascination with death and immortality, were wonderful. Unfortunately, that’s as good as the story gets for me.

It goes without saying that setting is important in fantasy but it’s the character that really makes it and this is where Odgen lost me. I simply couldn’t form any sort of connection to Anell whatsoever. The character is far too clinical for my taste, being little more than an extreme stereotype of the detached scientist. Despite how much she protests to the Countess that she’s “not an automaton,” Anell’s actions and choices indicate otherwise. True, there are attempts to portray a human or emotional side to her but those moments simply couldn’t overpower the unsympathetic blandness that is Anell.

Ultimately, even the apparent nod to Mary Shelley’s infamous Victor Frankenstein and the horror twist at the end wasn’t enough to save this story from falling flat for many reasons, not the least of which being that sacrifice, one of the tale’s themes, requires one to give up something they hold dear. Otherwise, it’s not a sacrifice. Unlike Dr. Frankenstein, there was precious little evidence that Anell genuinely valued or loved anyone or anything at all. I was never convinced that she was anything other than hollow and empty, which took away any poignancy or meaning the ending might have otherwise had.

“Adrianna in Pomegranate” by Samantha Mills

Three years ago, Benedetto and Sidony lost their daughter Adrianna. The child’s death drove a wedge between them and, shortly after, they parted ways. Left alone and lost in grief all these years, Benedetto suddenly closes his calligramancy shop and stops attending any guild or social functions. After a month, Sidony checks on him and, to her horror, finds him hunkered down in his workshop working on a spell that will bring Adrianna back.

Of the set of tales on offer this issue, this is the better of the two. Mills’ characters are relatable. Benedetto’s grief and the despair that drives him to find a forbidden way not only to repair his marriage but also to reunite with their daughter was real and genuine. His motivation in this mad endeavor was believable. The worldbuilding, done through vignettes of Benedetto and Sidony’s lives, glimpses into the fascinating the way in which calligramancy and magic work, and snippets of cultural expectations provided a solid sense of setting.

Finally, I feel it’s worth noting the Grecian mythological elements Mills brought into the story, such as the pomegranate ink Benedetto chooses to use or how his resolve wavers at the end and he turns to Sidony. Quite pleasantly, I was reminded here not only of Persephone’s abduction by Hades and the role that pomegranate played in that tale but also of Orpheus and Eurydice.