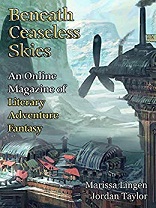 “The Deepest Notes of the Harp and Drum” by Marissa Lingen

“The Deepest Notes of the Harp and Drum” by Marissa Lingen

Jane has killed her abusive sister and fed her remains to the wild boars in the forest. This method of disposal was chosen out of fear that the bones might be found and made into musical instruments that would sing of her crime—it had happened before, after all. One evening, it’s revealed that local youths have killed a boar and made its bones and skin into musical instruments. Jane is terrified that her secret will be revealed but it only sings of how poorly the townsfolk treat the animals of the forest. Later, Jane meets Molly at another performance by the would-be musicians. The two become lovers and Jane discovers that she’s not the only one hiding a dark secret.

It’s a common theme in fairy tales for nature to reveal the crimes of the guilty so that they can be dealt with. Lingen’s story reminds me of one such tale I read as a child called “The Singing Bone.” The two share similar elements, such as the boar and the instruments made of bone that sing their stories so that the culprits might be brought to justice—or, as in this case, mend their ways since the boar’s bones were more concerned with the welfare of woodland creatures. Reading Lingen’s story, I had to wonder if this provided the source of inspiration for her tale. If so, her adaptation does a fine job in paying homage to the Grimm Brothers original. Either way, it’s a well-written story told from the point of view of one of the murderers, revolving around the fear of what would happen should their misdeeds be revealed.

Set in 19th century France, a young orphan is found asleep in the Opéra le Peletier and taken in by the production company. Unknown to the cast and crew, la Orpheline as they’ve come to call her is a shapeshifter. She’s trapped in human form by the magician who stole her animal form’s skin (a cat) and escaped after teaching him some of her skin’s magical secrets. Three years later, la Orpheline is now a seamstress for the opera house when it is revealed the magician is the patron of the Head Soprano, a contemptuous and coldhearted woman.

On the opening night of The Marriage of Figaro, he and another of his courtesans, La Reine des Fées, come to watch the show. Both of them see the girl as she watches the performance from the rafters above the stage, recognition on their faces. In her terror, la Orpheline slips and falls, breaking her leg. Days later, la Reine des Fées comes to see her, offering a plan that will help both of them escape the magician.

At first, I found the style in which Taylor wrote the story to be a bit ungainly. As I continued reading, however, I grew to really appreciate it and understood what effect she was going for. The narrative is written almost like a screenplay, complete with several acts. In fact, as I read, it felt more and more like watching an opera unfold on stage. The use of command words like “look” and “imagine” to direct the reader gave the reading a very dramatic flair, fitting with the opera-like style. I also appreciated the apparent nod to the selkie of Scottish folklore. Much like stealing a selkie’s skin gives the thief control over them, so does taking the girl’s cat skin give the magician the ability to use and steal her powers. This was an enjoyable read with a very satisfying ending.