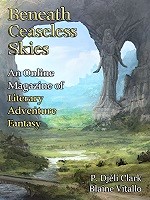 “The Weaver and the Snake” by Blaine Vitallo

Rana, a servant of the Goddess of Sorrows, has been sent by her Order of Soothers to the city of Aruth to meet the Grand Benevolence in “A Tale of Woe” by P. DJѐLí Clark. Gradually, Rana makes her way about the city Soothing people’s woes using her gift. At first, each person she meets seems random, but each encounter we learn more about Rana’s role and past within her order. Soon, Rana starts to perceive Aruth’s underlying turmoil. While it isn’t clear to Rana what her Goddess’s guiding hand is showing her, Rana never wavers even when she finds she must apply her abilities to a fallen friend. Clark delivers a well-balanced world that addresses devotion, friendship and a last act of mercy.

Reilitas is a very old woman living in the city of Adamonder in “The Weaver and the Snake” by Blaine Vitallo. Her “weaving” talent is well known throughout the Desert kingdom and feels satisfied at one hundred and three years old she has left her mark. However, after an earthquake, a great snake appears and starts reshaping her world. The snake’s purpose and progress becomes widely speculated by merchants and hunters. Reilitas remains unfazed by their rumors. Yet, once the snake starts destroying her work, her legacy unraveling, she feels a little lost at what to do. Vitallo’s meandering style shows how one artist chooses to deal with the loss of her lifework by weaving her last and greatest work.