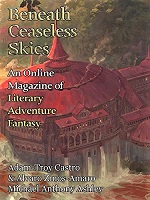 “Woe and Other Remedies” by Michael Anthony Ashley

Dispensing much wisdom, “The Mouth of the Oyster” by Adam-Troy Castro and Alvaro Zinos-Amaro gives great homage to old Asian morality tales. The main character and his wife, Li-Fan, were ravaged by a plague that moderately crippled Li-Fan and blinded the main character. Jin-Kwon offers eyes that see a facet of reality, whatever the main character chooses. Infused with a stoicism and quasi-mysticism not unlike Kai Lung’s Golden Hours and other such works, this is a delight to read and afterwards ruminate. What facet would the reader choose? But the choices the main character made were wise indeed, and entirely within character of the story itself.

Death is the ultimate debauchery in “Woe and Other Remedies” by Michael Anthony Ashley. Like any good decadent society, death games becomes the height of artistry, and through the eyes of Gama III, we experience the last of Dejarnira’s death games. The subject of Dejarnira’s last art is the relationship between nobles and slaves, and, as any may imagine, it ends as all death games do. Gama’s character provides interesting views as he is a veteran patron of such events, and despite the alien nature of the characters, his excitement truly feels palpable. The sexualization of death feels real indeed without being pornographic and the indescribable pride of the main characters goes above and beyond to sell the boredom, hate for life, and melancholy they experience in between Dejarnira’s art pieces.