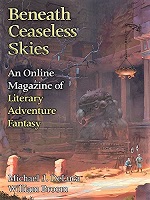 Staggerlee in Michael J. DeLuca’s “Dire Wolf” has fled the city, abandoning his relationship with Delia, to work out his regret by challenging every tough guy he could find. During one of these therapy card sessions, Delia suddenly arrives with Wolf. After Wolf wins all the money, kills the card players except Stag, Wolf declares they are even. Not skipping a beat, DeLuca focuses on Stag and Delia’s past. Yet, what few details DeLuca reveals is overshadowed by a third party and the relentless dangerous chase. Perhaps a word or two about Wolf’s role would’ve provided a little connection between everyone. Instead, DeLuca creates disjointed moments that leaves a clipped ending less than satisfying.

In “Corpus Grace” by William Broom, a heretic priest escorts a scarred woman to her destination before an Inquisitor finds them. Each story section finds the priest and the Inquisitor one step away from each other. Failure is unacceptable to both parties and you wonder how a priest’s last acts, helping a village and blessing a baby, could possibly be such a threat? Yet, Broom has artfully blended the Inquisitor’s story with the Priest’s highlighting the stacks the village faces and the Inquisitor’s need to snuff out a banished religion. It makes the priest’s final decision even more heartbreaking. Broom delivers a rich, spiritual landscape of two radically divergent theologies sparking a final show of humble reliance.