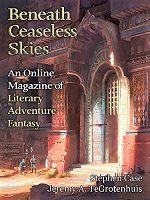 King Tsud had imprisoned a “Deathspeaker” and a tortured scribe we know as “Keeper” but the latter conspired with the former and the Deathspeaker was freed and the king killed. Her power is in being able to kill anyone whose name she speaks but this is basically a thing of fear for her new subjects, which leads to quite a tense situation. However, when the distant King of Bones sends envoys, demanding she kill at his command (as she had been forced to do by Tsud), she instead kills one of his envoys. Her realm prepares for war and the people rally around her since they approve of her defiance of the almost mythical and hated Bone King. Since the mutilated scribe believed she only cared for him due to his aid and stuck with him due to her precarious situation, he leaves when she seems settled in with loyal generals. He heads off to a monastery, believing they have knowledge which will help him learn the true name of the Bone King so that the Deathspeaker can kill him. The scribe finds less than that, yet much more. Basically, a kind of ice crystal that is a fragment of or reflection of the world (forward and backward in time) lies beneath the monastery—a sort of combination of crystal ball and Yggdrasil. But before the scribe can do much with this, the Bone King shows up at the impregnable monastery wall and hurls a living message over it. Turns out the Bone King’s power is that anyone whose name he knows will never die… no matter how cut up, burned, hacked up, or otherwise mutilated and ruined. Such as the living corpse with the message carved into it: “Send the one called Keeper.” The remainder of the tale mainly deals with the fighting between the Bone King’s and the Deathspeaker’s forces but, underneath that, is the war of life and death and a current on the feelings of the Deathspeaker and the scribe. Finally, there’s the usual Ceaseless cessation or BCSus interruptus, but with a twist.

This story moves too slowly across its thirteen thousand words and lacks the punch it should have. There is also a severe problem for me when the scribe does something that, however it works out, seems utterly stupid and at odds with what he’s been doing and aims to do. Granted, it’s leveraged but not strongly enough, given the big picture. And, while trivial, I have to say I don’t care for the naming convention. King “Tsud” sounds quite bad and it isn’t helped when you meet Drawoc, Ekip, Tlih, Reggad, Reidlos, and so and—especially when those names don’t seem particularly meaningful in either direction. That said, the Deathkeeper does have a numinous quality, the tension of her early reign and her later mastery are depicted effectively and the description of the Bone King’s army and the way it fights is quite powerful. The reversal of the usual connotations of life and death is also interesting. So, while not entirely successful for me, it was still above average and may appeal to fans of the specific mood and imagery.

The second story of this issue brings us a second broken world and a second sort of “military fantasy” tale. In this one, the world has thinned in places so that funky crystals break through and poison the land along with lots of monsters also breaking through. In this world, the crystals don’t come with any side benefits but the monsters do. Their skins and some organs and so on are very helpful to the gangs of folks living in the dead zones (as opposed to the rich folks of the cities which still seem to be fairly well off). However, some folks are just monster-poachers who bait their traps with young girls and take only the most valuable parts, leaving the carcass and the dead girls behind. On witnessing this, Orha goes on a vengeance mission and, when that doesn’t go so well, she also breaks and changes.

This is a ham-handed story. When Orha had seen her second dead child two-fifths of the way into the story and continued her incessant raging, I became tired of being browbeaten with cheap, simplistic emotions. While the moral of the story seems to be that the “good people” should not allow their righteous wrath at the injustice of the world to become self-defeating, it seems to mostly be an invitation to indulge in self-righteousness and hatred of those not as good as you are. All this emoting does serve to help prep for the deus ex but it’s still a deus ex and there are more conveniences in the entire ending sequence (such as a silly Bond-villain interrogation scene). Trivially, but still annoyingly, the word “karwan” is never explained (but context eventually reveals it to basically mean “tribe”) and “karwaneer” never appears outside the title. But if some readers are bothered by none of this, they may enjoy it. Its conception of magic powers is interesting and it is oddly “science fantasy”-tinged, with its monster-powered combat armor and descriptions of collapsed monster corpses which try to indicate physical laws when magic isn’t interfering. And, unlike most BCS stories, it ends.