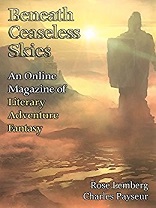 The July 20th issue of Beneath Ceaseless Skies contains the second half of Rose Lemberg‘s novella “A Portrait of the Desert in Personages of Power.” It’s set in the desert world where certain people have “deepnames” that give them magical power. The narrator is one of those, guarding a star—which, by legend, fell from the sky to form water wells and thus the cities of the world. She is something of a goddess, but a target for assassins. And when a man arrives—the Raker—she is unsure if he is there to kill her, or for something else entirely. The story is about the relationship between the two, and is filled with poetic language that, while arresting, begins to grow murkier as the story goes on. By the end, it became an example of telling, not showing, as the characters explain things to each other again and again. I found it very slow going, and the setting and motivations somewhat hard to figure out, though the relationship between the two main characters is well handled.

“Rivers Run Free” by Charles Payseur is set in the world where river water has become a scare commodity, all of it snapped up to run the power needs of the Lutean Empire. The narrator leads a group of ragtag rebels who are searching for the sea, a way to break the power of the empire and bring back the water. When they come upon the town of Abbottsville, their sheriff is skeptical of their intentions, as they are of hers. Like most stories I’ve seen in Beyond Ceaseless Skies over the years, the background is interesting and well-wrought, but plot-wise, it’s like an incident from a longer work: an event that the characters shrug off and move on from.