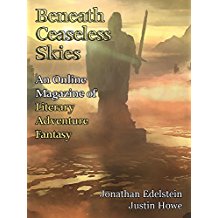 “Of Letters They Are Made” by Jonathan Edelstein

“A Late Quintessence” by Justin Howe

In “Of Letters They Are Made,” Taharah, apart from being the story-merchant is also a bard, a conjurer of images and sounds through the magical words written in the stories she acquires. However, the magic in the stories written in forgotten languages is locked. While she teaches her daughter Tamar and her newly adopted and talented boy Muqan the art of story-telling she is also researching for the key.

Jonathan Edelstein’s story is about a world where various civilisations collide. By using numerous names of languages, cities, nations or areas he reminds us of the past when Greece, Persia, and other ancient empires used to be at war. A Babel of languages fighting until one prevails.

Even looking at today’s age some written texts haven’t been deciphered; either it’s the Cretan hieroglyphics or the Greek Linear A. Usually the key for understanding them is when archaeologists find texts written along with their translation in other languages, but unfortunately this hasn’t been the case for these writings. The siege of the city depicted in the story reminds us of the destruction of great libraries in ancient cities, like the Library of Alexandria. Something that hasn’t stopped even now, looking at the artefacts that have been looted in countries in the Middle East like Syria or Iraq. Who knows which other keys or other scripts have been destroyed? As a result we have been left with a puzzle which will probably never be solved.

Moreover, we cannot forget that behind this story is a writer. Therefore, the key to understanding a story can be seen metaphorically. Taharah says that the key lies in “The story in which the other stories are told.” This is how this story is analyzed in our case as well: in the context of the background of the author’s and our world’s heritage.

He even includes advice on how to write a vivid story where the reader can see and feel the imagery:

In other words, write something that has affected you, something that is true to you and is so much engraved on your soul that you never dared to write it down.

We also see Taharah as a mother. We see how she nurtures her children, how she manages to transfer her knowledge to make the best of them, and also how she responds to the dilemma of what is more important.

In “A Late Quintessence,” Dierponte Hast, on the day of his retirement as Agent-Censor of the Magisters Subtle, hears again after many years the words of a forbidden play whose author and alchemist was sentenced to death for treason.

In Justin Howe’s story we see Dierponte sitting at his home while he relives his memories about Horn, who was a threat to the throne. We read mostly about the interrogation of Horn’s teacher, Lady Mermingosa, who retired to the country side. In the investigation we discover that Horn was researching a way to create ghostly creatures by destroying physical elements. It’s interesting to see how the physical homunculi are depicted. They are tiny humanoids (some made of a porcelain-like substance) that keep company and cavort mewling and tittering around Lady Mermingosa where she sits, who has grown them from vats. They seem almost eerie and the thought of having aether-formed homunculi float around can make one’s skin crawl. However, in certain places the language was distracting (at least to me) due to the frequent use of strange, archaic word constructions.