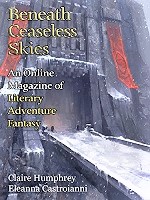 “Wooden Boxes Lined with the Tongues of Doves” by Claire Humphrey

“Think of Winter” by Eleanna Castroianni

Caring for Uncle Sholert’s doves is lonely work in “Wooden Boxes Lined with the Tongues of Doves” by Claire Humphrey, but William still finds time for himself. There’s plenty around to occupy him in between feeding the birds and harvesting their tongues for the secret boxes in the cellar. News of the war is omnipresent, and then there’s the pretty girl at the bakery. Yes, there are many paths William could take in his life, but which one will the whispering dove tongues allow him?

“Wooden Boxes Lined with the Tongues of Doves” is a dark tale about the choices we make and the consequences we must live with. The elements of magic employed in the story are subtle and between the lines, mirroring the atmosphere of the story itself. Readers may find themselves knowing more about what is going on with William than the character himself, but only barely. Only Uncle Sholert and Humphrey know the full extent of the mechanics and the manipulation present in this story.

In “Think of Winter” by Eleanna Castroianni, the cards are the only language Folu knows. They are the language of her mother, taken from her by the Grey Men. Now alone as winter fast approaches, she reads the cards that warn her about the coming of the Knight. He is a Grey Man, and he will ruin everything.

Castroianni tells a tidy story of colonialism and loss in “Think of Winter.” The language is plain and simple in keeping with Folu’s character. The confusion of growing through adolescence without any form of guidance is very tangible in the words. The story’s conclusion is somewhat open and leaves readers with a curiosity to know just what Folu will make of herself, or if she will even survive another year.