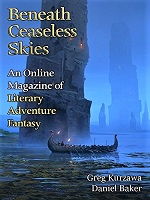 “Masks of the Mud God” by Greg Kurzawa

“The Marvelous Inventions of Mr. Tock” by Daniel Baker

“Masks of the Mud God” by Greg Kurzawa blends Arabian mythology and science fiction. Miriam is the daughter-wife of the reptilian conquerors of humanity. Displeased with how her race produces nothing and lives as parasites on humanity, she strives to rebel against her father by poisoning her unborn child. The result leads to a new era of the world. Kurzawa’s language is well suited to the mythic tenor of the story, but the pieces only fit middling well. The ideas are interesting, but don’t resonate very well. The story lacks the final connections to bring it full circle, still it is an interesting work and a good fit for those who like exotic world building.

Daniel Baker sets “The Marvelous Inventions of Mr. Tock” in a steampunk world where the Justice, a sort of police detective, is trying to deal both with the corruption rampant in the city’s hierarchy and a series of symbolic clockwork murders. The story is fairly well written and the ending is open enough to permit a number of interpretations. It does suffer from a few weaknesses. The first section doesn’t fit the rest of the story and has a feel as if the author were trying to channel Terry Pratchett. The humor disappears soon thereafter which is a wiser decision. I also find the ending too vague. While I suspect it was a deliberate authorial choice, it weakens the overall story arc. The contrast between political and moral justice needs to be better highlighted to give the story the impact it could have. While solid, it is disappointing that the story was not as good as it had the potential to be.