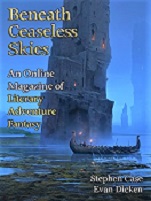 “The Aeroliths” by Stephen Case

“The Uncarved Heart” by Evan Dicken

In “The Aeroliths” Stephan Case creates a world of floating stone, exiled nobles and political intrigue. The story is framed as a scroll read by the current wizard Theodulus. In it we learn the history of the wind spirit that is tied to the floating house. The world created is imaginative and the language rich and evocative. The pace is slow with a focus on world building, rather than action. Overall, this is an interesting read and suggested for those who prefer a slower paced, magical story.

Evan Dicken’s “The Uncarved Heart” deals with a world dominated by the Volant, an avian humanoid who replaces the hearts of their subjects with a mechanical, steampunkesque heart that helps to control them. The narrator is the daughter of the local plantation owner. Since her mother is away fighting rebels, she has the run of the place and grows up wild. As she grows, she eventually learns that her native friend, Izavel, is a rebel and assassin.

The world is richly imagined and the description is lush. Unfortunately, the story suffers some shortcomings. The author creates a fascinating, distinctive world, but the sheer amount of new material fails to leave room to explore the ramifications of the world, Add to this the multi-level colonialism, the problems with character motivation (the protagonist seems entirely fine with expansive blood, violence, and betrayal as long as she can spend time with her friend), and you lose the opportunity to explore a fantastic, in both meanings of the word, creation and the interesting themes that are partially introduced. There is a lot to like about this story, but an unbelievable narrator kills what otherwise might have been a great tale.