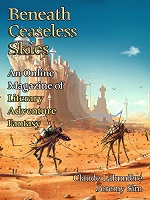 “The Patchwork Procedure” by Claude Lalumière

“What Pada-Sara Means to the Elephant” by Jeremy Sim

“The Patchwork Procedure” by Claude Lalumière is set in an alternate history Canada, told from the perspective of a captured political assassin being held in the Prison Commune de Québec by La Nouvelle France Indépendante. Lalumière presents the reader with a well-developed alternate history time-line as told by his loquacious protagonist in a narrative which serves not only to inform but to distract the reader from the mystery of the Patchwork Procedure until the climax of the story. The mystery in turn becomes what the narrator will do with his new found knowledge, as readers are left purposefully hanging, imagining that moment of indecision.

“What Pada-Sara Means to the Elephant” by Jeremy Sim follows two bharjana youth, Anu and Shashi, on the run from their yodhinika masters who enslave the bharjana in order to exploit their bread magic—but not for long. When Anu learns that the caste system is falling apart, Anu must decide what strategy to adopt in the new political landscape. Sim uses a strategy game that Anu excels at, Pada-Sara, as an analogy for the youth’s novel predicament and subsequent choice, a choice which perhaps makes the most sense when seen from the “Elephant’s” point of view. The characters’ names and the elephant piece harken to Hinduism, in which the elephant god Ganesha symbolizes wisdom and intellectual prowess.