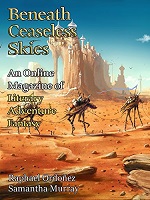 “Salt and Sorcery” by Raphael Ordoñez

“A Deeper Green” by Samantha Murray

The 205th issue of Beneath Ceaseless Skies has two original novelettes.

“Salt and Sorcery” by Raphael Ordoñez

This science fiction/fantasy novelette introduces us to Orana, an orphan with rose-colored hair that hides her two glassy antennae. Her ‘protector’ Darden, who exploits her special powers, holds her captive. He guards the last four special pods that her magic can animate into biological weapons. One day she escapes from Darden when the airship they are on crashes in a storm, dumping her in the middle of the salt flats.

She is close to death when she stumbles on a rocky outcrop occupied by young parentless children. The children obey a mysterious queen who has forbidden them to help anyone. When Orana wins the children over to her cause, the queen finds out and threatens to take them all away. Orana must use her special magical ability and three of her remaining pods to stop the queen in her tower. When Darden finds her again, she is once more called to action to protect her new young wards.

An interesting story; just when the descriptive elements slow it down, the action takes a new turn and the tale re-engages the reader. The author did a nice job of keeping several mysteries pulling the reader through to the end. An enjoyable evening read.

“A Deeper Green” by Samantha Murray

Juvianna can move through anyone’s mind in this science fiction novelette. Her role is to work on the minds of criminals, removing bad memories and harmful traits to make them safe and productive again. The work is stressful and not without danger, having taken her father’s life two years ago.

To help her “come back out” of a mind she has Davvi as her minder, growing dependent on his careful touch. In time, the village elder decides to apply her talent as a preventative. Against her wishes, he demands that all villagers submit to her probing invasions to eliminate any bad traits. As the inevitable resentment grows towards her, some seek to kill her. In the end, she must find a way to escape her village, but how can she leave her minder behind?

The steady development of the two main characters plus the ratcheting up of the tension made this an engaging story. The author did not over-deliver the moral teachings in the parable. It was a story that I was glad to have read.